Taiwan is playing on China’s clumsiness, and China doesn’t know what to do 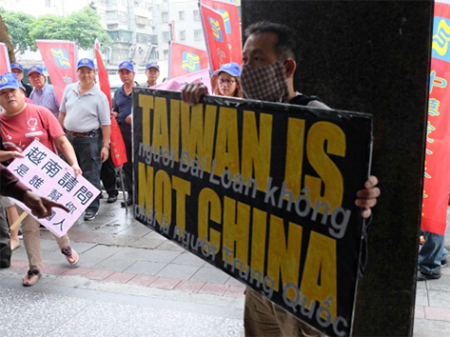 China could just take Taiwan by force with its 2.29 million troops and 2,800 aircraft, ending debate about whether the democratic, self-ruled island is part of Chinese territory.

But that move would park an enraged, rebellious population just offshore and anger the major countries that back China’s huge economy. China prefers peaceful unification with Taiwan. Problem is, a chain of events, from 24 days of anti-China protests to a spat over Hong Kong, have sent China to Taiwan’s doghouse.

Now Beijing is looking for an exit without barking too loud, at the risk of further irritating Taiwan, let alone bite. But the door is stuck shut despite six years of warming relations under Taiwan’s normally conciliatory President Ma Ying-jeou.

China is obviously peeved. It has been throwing bones to Taiwan’s economy for six years with the idea that its people would see relations with the world’s No. 2 economy as a valuable asset. Then, per the theory, the Taiwanese would be less afraid of unifying. China has claimed sovereignty over the island since the Nationalists fled there in the 1940s after losing the Chinese civil war to Mao Zedong’s Communists.

But Taiwanese value their de facto independence and the government said in September that 70% of the population opposes unification with China even with a high degree of local autonomy. That finding came after mass protests in Taipei against China in March and April. Those protests, targeting parliament at first then the government, mothballed ratification of a service trade liberalisation pact signed with China in 2013. Last month Ma caustically asked China to allow democracy in Hong Kong.

“Some PRC elites are already suspicious that Taiwan is playing China, taking the economic benefits without making the political concessions China expects as part of the supposed bargain,” says Denny Roy, senior fellow at the East-West Center, an American research institute.

Beijing is clawing at the doghouse door to stop relations from getting worse as a presidential race looms in as little as 14 months, threatening to install an anti-China leader.

It’s easy to see why the normally careful-spoken Chinese President Xi Jinping mentioned “new problems” in relations when he met Taiwan’s delegation to the Asia Pacific Economic Cooperation (APEC) forum Sunday and urged that both sides find ways to solve them. “I think what Beijing is saying is that it is important to impart renewed momentum to the relationship now and not risk going in a counter-productive direction now or in the future,” says Alan Romberg, East Asia Program director at The Stimson Centre, a Washington D.C. think tank.

Beijing will probably keep lobbing bones, building on 21 agreements signed to date on travel, trade and investment. It will be careful not to suggest unification out loud to Taiwan, as Chinese President Xi Jinping has done twice since October 2013 – one source of the new problems. “Taiwan maybe felt the storm was coming,” says Lin Chong-pin, retired strategic studies professor in Taiwan, referring to Xi’s Sept. 26 comment suggesting that Taiwan be ruled like Hong Kong, essentially with local autonomy but plenty of space for China to step in. From here onward, he guesses China will be “going back to the previous track, when the atmosphere was more relaxed.” Not much else it can do.

In 2016 Ma must step down due to term limits. “It is safe to say Xi is disappointed that Ma is not delivering what Beijing hoped, which is to prepare Taiwan to accept peaceful unification,” Roy says. But what’s next might have the dog tearing at its chain. Voters could pick a president from the chief opposition Democratic Progressive Party, which ruled from 2000 to 2008 until Ma took office. Senior people in the party say they’re open to dialogue with China, especially if the two sides talk as separate governments, not parts of one per Beijing’s demand. That’s the moderate faction. Others want legal independence for Taiwan, and China says that would make it mad enough to bite.

China News is a collection of original and reposted news and articles about China, collected from the best sites around the web. It is also a place for writers about China to promote their own sites.
View all posts by China News »
« New China urges increased hostility towards the west
China’s Space Bus »