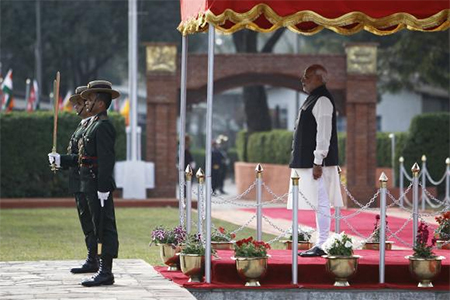 Prime Minister Narendra Modi watches a guard of honour upon his arrival for the 18th South Asian Association for Regional Cooperation (SAARC) summit in Kathmandu November 25, 2014.

However, a Reuter’s report says that China is very interested in having its status raised from “observer” in the South Asian Association for Regional Cooperation (SAARC). SAARC now consists of such full members as Afghanistan, Bangladesh, Bhutan, India, the Maldives, Nepal, Pakistan and Sri Lanka.

It is interesting that China has borders with most SAARC members including Afghanistan, Bhutan, India, Nepal and Pakistan so that many regard some parts of it as within South Asia, but South Korea, a country entirely outside South Asia, is also interested in SAARC full membership.

For those who regard China as having the ambition to conquer the world, China’s interest in infiltrating into South China is quite natural. What about South Korea?

According to Reuters, SAARC has an urgent need for enhancing economic cooperation as it is a region with a fifth of the world’s population but barely any shared roads, fuel pipes or power lines.

For years China has been building roads, power stations, etc. and supplying weapons to some SAARC members. It’s a part of China’s efforts in building the Silk Road and the Silk Road of the Sea. The Silk Road was an ancient trade link on land between China and the parts of the world to the west of China. It is no longer useful as marine shipping is much easier and more cost effective.

However, now the sea route between China and those parts has become China’s trade lifeline and there is the danger of such route being blocked by the United States’ superior navy. Rebuilding the Silk Road and development of a new Silk Road of the Sea are now vital for China’s survival.

Ports and especially military bases along the Silk Road of the Sea are of great strategic significance for China.

On the other hand, through enhanced cooperation in building roads, railways, power stations and grids, and other infrastructure, the SAARC will provide a vast market and lots of cheap labour.

That is why not only China but also South Korea is interested in joining SAARC.

Reuters report only mentions that Pakistan wants to allow South Korea to become a full member in addition to China, but says nothing else about South Korea joining SAARC.

It in addition quotes a Chinese Foreign Ministry spokeswoman as saying, “China attaches great importance to SAARC’s status and function. China is also willing to elevate the level of its relationship.”

The following is the full text of the Reuters report:

When eight South Asian leaders gather for a summit in Kathmandu on Wednesday, they will meet in a conference centre donated by China to its cash-strapped Himalayan neighbour Nepal 27 years ago.

In the decades since it built the modernist brick and glass hall, China has massively stepped up its presence in South Asia, supplying ports, power stations and weapons.

China’s advance has been aided by bickering between India and Pakistan that stymies almost all attempts at integration in a region that is home to a fifth of the world’s population but has barely any shared roads, fuel pipes or power lines.

India’s Prime Minister Narendra Modi has not welcomed Beijing’s renewed suggestion its status be raised from “observer” in the South Asian Association for Regional Cooperation (SAARC), in which India is presently the only major power.

Modi’s hope of using the group as a counterweight to China is unlikely to gain traction at the two-day Kathmandu meeting, with officials saying Pakistan is blocking deals to increase transport and energy connections.

Pakistan mooted the idea of upgrading China’s and South Korea’s status in the organisation at a meeting of SAARC foreign ministers on Tuesday. It was quickly rebuffed by India.

“We need to first deepen cooperation among SAARC, before we try and move it horizontally,” an Indian foreign ministry spokesman said. He said several countries agreed.

China has sent Vice Foreign Minister Liu Zhenmin and is expected to make a statement during the summit.

The paper cited serving and former Nepali ministers expressing support for the proposal.

“China attaches great importance to SAARC’s status and function,” a Foreign Ministry spokeswoman told reporters in Beijing on Tuesday. “China is also willing to elevate the level of its relationship.”

The geographical limits of South Asia are not fixed – Afghanistan was included as a member in 2007, while Myanmar, which borders India and Bangladesh, merely observes. But the Himalayas are generally seen as dividing China from the subcontinent.

“There are many other possibilities in between observer status and full membership, we are happy that China has shown interest,” Nepal’s communications minister Minendra Rijal told Reuters, adding the issue needed consensus.

Author of the book "Tiananmen's Tremendous Achievements" about how with the help of Tiananmen Protests, talented scholars with moral integrity seized power in the Party and state and brought prosperity to China. The second edition of the book will be published within a few days to mark the 25th anniversary of Tiananmen Protests All the parts in the first edition remain in the second edition with a few changes due to information available later and better understanding. There are also some changes for improvements of style. The new parts are Chapters 12-19 on events in China after the first edition was published: The fierce power struggle for succession between reformists and conservatives; Xi Jinping winning all elders’ support during his mysterious disappearance for 2 weeks in early September, 2012; and Xi Jinping Cyclone. Chan Kai Yee's new book: SPACE ERA STRATEGY: The Way China Beats The US An eye-opening book that tells the truth how the US is losing to China. The US is losing as it adopts the outdated strategy of Air-Sea Battle while China adopts the space era strategy to pursue integrated space and air capabilities: It is losing due to its diplomacy that has given rise to Russian-Chinese alliance. US outdated strategy has enabled China to catch up and surpass the US in key weapons: Hypersonic weapons (HGV) that Pentagon regards as the weapon that will dominate the world in the future. Aerospaceplane in China’s development of space-air bomber that can engage enemy anywhere in the world within an hour and destroy an entire aircraft carrier battle group within minutes. Anti-satellite (ASAT) weapons, anti-ASAT weapons, stealth aircrafts, drones, AEW&C, etc. The book gives detailed descriptions of China’s weapon development based on information mainly from Chinese sources that the author monitors closely. U.S. Must Not Be Beaten by China! China is not a democracy. Its political system cannot prevent the emergence of a despotic leader or stop such a leader when he begins to bring disasters to people. A few decades ago, Mao Zedong, the worst tyrant in world history did emerge and bring disasters to Chinese people. He wanted to fight a nuclear war to replace capitalism with communism but could not bring nuclear holocaust to world people as China was too weak and poor at that time. If a despot like Mao Zedong emerges when China has surpassed the US in military strength, world people will suffer the misery experienced by Chinese people in Mao era. China surpassing the US in GDP is not something to worry about as China has the heavy burden to satisfy its huge population, but China surpassing the US in military strength will be world people’s greatest concern if China remains an autocracy. US people are of much better quality than Chinese people. What they lack is a wise leader to adopt the correct strategy and diplomacy and the creative ways to use its resources in developing its military capabilities. I hope that with the emergence of a great leader, the US can put an end to its decline and remain number one in the world. China, US, space era strategy, air-sea battle, space-air bomber, arms race, weapon development, chan kai yee
View all posts by chankaiyee2 »
« Is this the end of China’s economic miracle?
Hong Kong: Pearl of China »