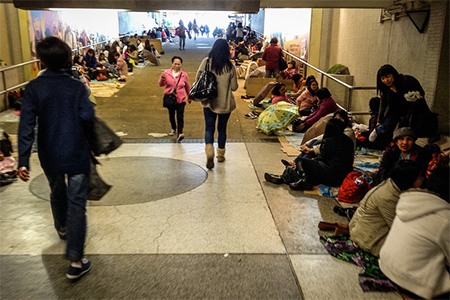 Recent protests in Hong Kong caused me to reflect once more on my short stay in this Pearl of the Orient. If Hong Kong was dreading its return to mainland China in 1997 for political reasons, with the battle of Tiananmen Square less than a decade earlier still looming over its people as the threatening dark clouds of Mordor, the anticipation of wealth that would be flooding its streets and shops and households made up for it.

The bitter-sweet, decades-old Chinese medicine of ‘two systems, one country’ would do the trick, it was assured. But what good can come from an affair with an abusive husband?

Well, if anything: money. And lots of it. It was on a Sunday afternoon, my fourth day in Hong Kong, that I got to see the otherwise unseen -and I wasn’t even looking for it. I had just ran down from Victoria Peak -with its stunning views over the city all along the way, a must-do, really!- when I stumbled, quite literally, into them. They crowded the parks and squares and sidewalks, even came out of the churches: hordes of Filipinos.

Wherever I went I had to circumvent countless groups of young Filipinos and if they hadn’t all seemed so happy and cheerful, I would have thought they were refugees fleeing yet another flood. By the thousands they were hanging around: picnicking, playing games, dancing, singing, or just chatting away. Mostly women. Some men. Very few kids.

Cardboard boxes and large blankets and lined-up backpacks marked their territories and with each step I was afraid to intrude into their world. Where had they all come from? Even the underground passageways were crowded.
These, as I soon learned, were the housemaids employed by Honk Kong‘s new generation. Having a live-in Filipino is a true status symbol. And Sunday is their day off.

Invisibly locked away in the homes of their employers, you hardly see them during the week, unless to carry the master’s baby while hopping behind the young shopping parents. Filipino maids are desired for their proper English, gentle spirit and polite manners. They come in cheap and can be dismissed easily. Hong Kong has surely prospered with the constant stream of new opportunities that pour in from the mainland. Then why hasn’t it brought more happiness? What is the problem? What is it that gives them sleepless nights?

Back in ’97, just before Britain’s handover of Hong Kong to China, the train-traveller Paul Theroux exclaimed “The people of Hong Kong are criticised for only being interested in business, but it’s the only thing they’ve been allowed to do”. That may have been true, back then, but now they are preoccupied with 2 other things too: shopping -not a big surprise, I know- and demonstrating.

It was the shopping that got them worried first. People of Honk Kong (hereafter referred to as Hong Kongers, correctly confused with Hong Kongese, often called Hongkongese rather than Hongkongers) -as I said, Hong Kongers love shopping – and take it from me, this is rather a good thing if you consider that there really isn’t much else to do anyway – but mainland Chinese love it even more.

In 2013, an estimated 41 million mainland tourists visited the city, a figure expected to double within the next few years – in a city of just over 7 million people. Shop owners were so delighted that they started to ignore local -Hong Kongese- shoppers. After all, if your store can hold 20 shoppers at the time, you want your staff to focus on the ones that are known to spend thousands, rather than on the thousands that spend just one, or, God forbid, may just be looking around.

Shop doors are closed now and guards, complete with powerful biceps and earpieces and a stylish uniform, will once in a while allow a next customer to enter -true die-hards who willingly endured hours of boredom in yet another long queue.

For most locals, this was hard to take. Especially after mainland Chinese started the habit of buying all of Honk Kong’s baby milk, driving up the real estate price and taking up all baby hospital beds, the Hong Kongers now find themselves effectively expelled from their own shops and hospitals. And for true Hong Kongers, whom, after a century long of plodding and ploughing under -ironically- undemocratic rule by the otherwise so civilised Brits, have come to see the mainland as inferior and barbaric, this simply is too much to bare.

As Bi Feiyu, one of (mainland!) China’s leading authors, explains, Honk Kong is losing its identity and culture and habits just as Europe lost its refined Roman culture after it was overran by uncivilised German barbarians. Good habits take hundreds of years to develop, but losing them seems to happen in the blink of an eye. It is, fundamentally, the same irreversible change that Tibetans and Uighurs face and struggle against.

But the social and cultural discontent with the unification is not limited to the loss of purchasing power and colonial civilisation. It is the political climate, too. What also keeps them awake -or rather, what gives them terrible nightmares- I discovered next. I had slowly shuffled on, leaving the Filipinos behind and turning some corners left and some others right until I hadn’t the slightest idea where I was or where I was going. (This, by the way, happens much more often then I would like to admit, but the upside is that with no destination or schedule to reach, this is quite a liberating way to discover this city -any city, really.)

It was during this aimless wandering, still contemplating the plight of these thrifty migrant workers, that I suddenly found myself in front of a TV-broadcasting office where a demonstration was just disintegrating. Banners were rolled up, signs were taken down and the participants walked off. This time, the protesters were journalists and others concerned about free press, protesting against the replacement of yet another editor by a, what they called “Beijing crony”.

Before this, Hong Kong saw protests against mainlanders’ rude behaviour. Against politicians whose ears are hanging too much towards Beijing and for baby milk powder. Against spitting Chinese and for England and the queen. Against the rewriting of Hong Kong’s history. It seems the Hong Kongers are thinking: let’s demonstrate now we still can -Bloomberg may have capitulated, we will not! Protests are practically for and against everything. Most recent protests, though, were against all who are against and were calling for stability.

Either way, demonstrations have become part of daily life. So much so, that Jackie Chan, tired of seeing so many of his fellow city-men on the streets each day -instead of being productive and law abiding citizen, like, say, his son- and with the great wisdom he is known for, cried out that it was about time for the government to determine who can demonstrate and for what, and, please, you common people, just let Beijing do what it does best.

The recent July-1 demonstration -as well as the June-4 protest in remembrance of the violent crackdown of the Tiananmen Square protests– was more than just anger about the past. Nor was it merely a statement of discontent with the erosion of political freedom in The Pearl that isn’t easily soothed by Beijing’s slogans of stability and harmonious society. It was a sign of desperation of a people that know they are about to lose everything: their freedom and securities, their culture and the social and moral standards they have come to treasure. It was a sign of an abused spouse that feels increasingly powerless to change the tide and wonders: how much longer?

One thought on “Hong Kong: Pearl of China”