The following are the views of the original author, and not necessarily those of China Daily Mail:

Apart from their frantic dredging and island-building in the South China Sea, China is now also building an air and naval base in the Nanji Islands (27° 27’ N, 121° 04’ E) which is the closest part of China to the Senkaku Islands.

They had previously built an airfield on a ridge (26° 56’ N, 120° 05’ E) near Xiapu to be close to the Senkakus.  The current Google Earth image shows some Su-27s or clones at the western end of the apron and some J-8 Finbacks in the center of the apron.

The new base in the Nanji Islands is only a few minutes closer to the Senkakus by jet aircraft but it puts China within ferry distance by helicopter. A photo carried by the Japan Times shows a hill with its top flattened and now bearing at least eight helipads:

Within minutes there would be photographs of the Chinese flag being raised on the peaks of the islands. A few minutes later they would be on the net. And Japan would be the aggressor in removing them. So that is what these helipads are for. It is all about how to start a war without being painted as the aggressor.

When China has been the aggressor all along, as shown by the graph below from Japan’s Ministry of Foreign Affairs:

The red bars are the number of Chinese incursions to Japan’s territorial waters around the Senkakus per month. It is apparent that this is a directed and sustained effort.  Now the Chinese are also directing literally hundreds of vessels to the Osagawa Islands in the Second Island Chain, which includes Iwo Jima.

With respect to the Senkakus, Chinese people have never lived on these islands. Japanese living on the islands peaked at more than 200 prior to World War I. The Chinese claim does not have any foundation whatsoever. 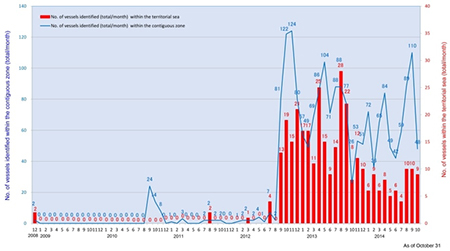 With respect to the South China Sea, last month the Department of State released Report No. 143 on “Maritime Claims in the South China Sea”. The report shows why China’s claims there are invalid. The Philippines has a claim against China over its territorial ambitions in the South China Sea before the International Tribunal for the Law of the Sea in Hamburg. The Tribunal may produce a result by the end of this year. An adverse finding may have trade repercussions for China.

The nations around the South China Sea are preparing for war and so are the U.S. Marines. The Marines are building a command post at Oyster Bay on the west side of the Island of Palawan, which is the closest part of the Philippines to the Chinese bases in the South China Sea. The Marines would see their role as scraping the Chinese off their artificial islands once hostilities break out. It is good to see that somebody besides China is planning ahead.

Back to the Senkakus. The Japanese have not put any troops on these islands because they didn’t want to escalate the situation. That is completely misreading it. The Chinese preparations on the Nanji Islands etc. mean that the war is coming. All Japan can do is put itself in a better position.

What it needs to do soon is send a team of archaeologists to the Senkakus to curate the Japanese habitation of these islands, with logistical support provided by a company of naval marines. The important thing is that they will run up the Japanese flag every day. If they Chinese have to step over dead Japanese bodies when they attack, that will put Japan in a far better moral position.

China News is a collection of original and reposted news and articles about China, collected from the best sites around the web. It is also a place for writers about China to promote their own sites.
View all posts by China News »
« China has just banned the burqa in its biggest Muslim city
China’s Xi Jinping to establish his powerbase through leadership reshuffle »

4 thoughts on “China prepares for war”