China’s bubble is about to burst

All the devils have come together for the Chinese economy and the country’s “long-awaited day of reckoning” is upon us, writes Societe Generale analyst Wei Yao in a recent note.

To China bears who’ve said that the country is a debt bubble, Wei’s conjecture will seem obvious. To bulls it raises another question: Where would these credit problems come from? Where have they been hiding?

Wei’s answer is simple: Problems have been lurking within state owned enterprises (SOE) and in a lesser sense, local government financing vehicles (LGFVs).

China’s credit growth has been outpacing its nominal economic growth for six years. The puzzle has been the lack of credit problems, but there is actually a simpler explanation — the pervasive implicit state guarantee. No one, especially not Chinese policymakers, has ever disputed that this has to change. Rather, the question has always been when. The series of recent reform action suggests that we are approaching this long-awaited day of reckoning, as local governments’ ability to extend credit guarantees gets checked at a time of slowing domestic growth and tightening global liquidity.

For years SOEs and LGFVs have been bloated due to implicit government guarantees. This is where China’s massive debt lives — in the mostly state-owned corporate sector — and it is where the government has allowed it to thrive.

Government bonds, local and central taken together, are barely more than 20% of GDP and households, with 80% of GDP deposits, account for another 20% of GDP debt. Corporates are the biggest borrowers, but two groups of government-related entities — local government financial vehicles (LGFVs, 30-35% of GDP) and state-owned enterprises (SOEs, 90-100% of GDP) — account for the lion’s share. Among lenders, nearly all aspects of China’s financial system are still dominated by state players, from formal banking, insurance and asset management to shadow banking (finance companies and trust companies, for instance).

The argument is that the day of reckoning is imminent because these SOEs can no longer take debt like they used to. Liquidity drying up around the world. China is deflating. Corporate margins are thinning as nominal growth slows (8.2% vs. 9.5% in 2014).

For the 6th year in a row, credit growth (14.2%) far outpaced nominal growth in 2014. In the simplest of terms this is like charging $US2,000 to your credit card in one week when you make $US1,000. In China, though, SOEs and LGVFs haven’t really had to pay down much of their interest. And there isn’t much of a limit either.

Wei sees these problems bubbling up from below. Local governments will be the first ones unable to extend credit. A bunch of LGFVs called off bond sales in December because the government wouldn’t guarantee them. Land sales are falling as well, which means local government’s aren’t making as much cash. That bubbles up to the corporate sector because property is big business in China. Kaisa, a big developer, defaulted earlier this year. It was the first developer of its kind to take a hit like that, and now creditors are watching the sector with fear.

What seems clears is that the companies without an implicit government guarantee are the ones who will go down first. Those companies are also the healthiest since they didn’t have that guarantee in the first place and didn’t pile on loads and loads of debt. 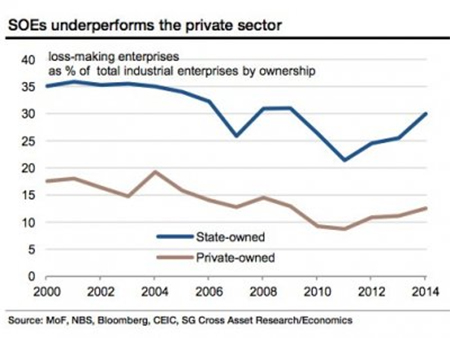 Think about it: If someone isn’t guaranteeing your credit card debt, you might be more careful with your money. If they are guaranteeing that debt, like the government is guaranteeing debt for SOE’s, you may spend (a lot) more freely.

All of this — China’s slowed economic growth combined with drying credit — sounds pretty dire, but for the moment all is not lost. Wei says that the government is doing what it can by encouraging public-private partnerships for infrastructure development and mixed ownership for SOEs.

The thing is there’s a lot of risk as this happens. The world isn’t stopping for reform. China’s economy is still slowing, and liquidity is still drying up. Reform must happen quickly over 2015. The government has the gargantuan task of turning a massive ship in troubled waters before it runs aground.

Some may be lost along the way.

General Manager at Craig Hill Training Services * Get an Australian diploma by studying in your own country * Get an Australian diploma using your overseas study and work experience * Diplomas can be used for work or study in Australia and other countries. * For more information go to www.craighill.net
View all posts by Craig Hill »
« The Russian Far East: Russia’s land, China’s funds
China wants to increase military exchanges, but US rethinks plans for further ties »