China likely to end up as former would-be superpower 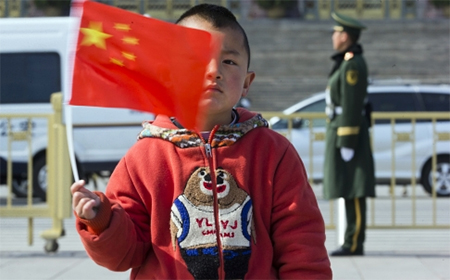 A child poses for photos with a Chinese national flag near the Great Hall of the People in Beijing. Goldman partner Roy Smith sees problems for China such as the burden of an ageing population, with mounting pension and health-care costs. Photo: AP

Forecasts for China to surpass the US as the world’s main economic power are misplaced. So says an observer who foresaw Japan’s eventual demise a year before its land-price bubble began to burst.

“The vulnerabilities in China today are very similar to the vulnerabilities in Japan,” said Roy Smith, 76, who was a Goldman Sachs partner when he wrote a column saying Japan’s rise as a financial hegemon was finished. “Nobody agrees with me. But they didn’t agree with me in 1990, so at least I have one right.”

A further parallel is the burden of an ageing population, with mounting pension and health-care costs, he says.

While China probably will avoid prolonged Japan-style stagnation, a major crisis could expose weaknesses that are not apparent now, Smith said.

“Most people today are talking about China displacing the United States as the great power of the 21st century,” he said. “My view is that it is more likely to end up like Japan – that is, the status of a former would-be superpower that isn’t.”

China surpassed Japan as the world’s No2 economy by gross domestic product in 2010 after three decades of rapid growth. It is tipped by many forecasters eventually to overtake the US in output. By other measures, such as GDP per person, China is further behind the US.

On a per capita basis, China’s GDP in 2013 was still just half of where Japan was in 1960, according to World Bank data. That leaves plenty of scope to catch up to rich-world peers, more optimistic observers say.

“The key difference I see between China now and Japan in 1990 is that China is at a much lower stage of development,” said Louis Kuijs, chief China economist at Royal Bank of Scotland in Hong Kong.

Last year, the economy expanded at the slowest full-year pace in almost a quarter century. The slowdown has thrown a spotlight on a mounting debt pile. Doubts about creditworthiness of debt deepened last year, when Premier Li Keqiang started to pare back implicit guarantees for regional financing units.

China’s total debt pile, including borrowing by households, banks, governments and companies, ballooned to 282 per cent of national output in the middle of last year from 121 per cent in 2000, according to an estimate by the McKinsey Global Institute.

“The Chinese financial structure is very fragile because a lot of it is misreported and will reveal a great deal of weakness when it comes out,” said Smith. “I don’t know when it is going to come out, but when it does it is going to have consequences and take away a lot of the world’s confidence in the Chinese system.”

Some signs of stress are already emerging: Kaisa Group Holdings, a troubled real-estate developer based in Shenzhen that must repay billions of dollars in borrowings this year, rattled investors by missing payment deadlines on a loan and a bond after the local government blocked several of its projects late last year.

“They say a rising tide lifts all boats – a falling tide reveals all the rocks and slime,” said Smith. “There was a lot of it in Japan that people did not expect to see.”

China’s leaders are trying to restructure the economy toward domestic demand led by consumption and services.

“China won’t end up in this peculiar Japanese no man’s land between growth and non-growth,” Smith said. “But I do think they could have an economic smash-down that could really set back the China dream and the China role as a global superpower in major ways.”

China News is a collection of original and reposted news and articles about China, collected from the best sites around the web. It is also a place for writers about China to promote their own sites.
View all posts by China News »
« China’s No. 3 leader warns Hong Kong activists against ‘crossing a line’
China aims at long term elimination of corruption by legislation »