South China now favoured way out of country for IS recruits 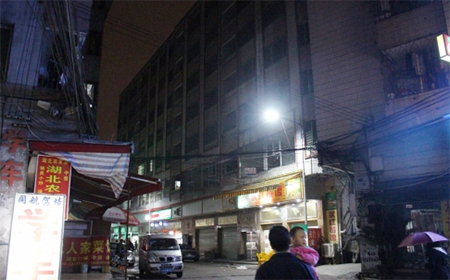 Two Uygur women armed with knives were shot dead in Guangzhou’s Baiyun district the night before the Guangzhou Railway station knife attack. The area has become a meeting place for Uygurs in recent months.

China’s southern seaboard has replaced the mountainous and tightly guarded western frontier as the preferred route for Islamic extremists to slip recruits out of the country, according to a leading expert on terrorism.

Rohan Gunaratna, the head of the International Centre for Political Violence and Terrorism Research at Singapore’s Nanyang Technological University, claimed that “over 400 Uygurs have left, most through Hong Kong via Indonesia, Malaysia and Thailand to join the IS [Islamic State].”

He refused to disclose the source of the information about the recruits to the militant group, which is active in Syria and Iraq. “There should be greater intelligence cooperation to detect and disrupt terrorist travel,” Gunaratna told the South China Morning Post.

A Hong Kong Police Force spokesman said last night that there was no solid intelligence to show that Hong Kong was a likely target of terrorism and the city’s terrorist threat level remained moderate. He said police would remain on high alert and take appropriate precautions in response to the risk assessment.

Gunaratna’s claim comes as a leaked Guangdong police document revealed that the authorities broke up a Pearl River Delta syndicate that smuggled at least six Uygurs to Macau on February 18 and 24. The document said the syndicate was planning to smuggle more Uygurs hiding in Guangzhou, Foshan and Zhongshan to Macau before police busted the ring on March 2.

The document, which has been verified independently, also revealed that a boat that capsized in Macau waters on February 27 was actually ferrying Uygurs – not Chinese gamblers as previously reported.

The boat capsized about 500 metres from the Grand Coloane Resort, and six people, including an alleged snakehead, were picked up by Macau customs and police. Another 10 people were missing and presumed dead.

Macau police later confirmed this was a covert operation to smuggle Uygurs out of the mainland. The Guangdong police document implied that the Uygurs on the vessel were involved in terrorist activities and this had prompted them to carry out the March 2 raid.

Four days after the raid, at least two knife-wielding attackers injured 13 civilians in the square outside the Guangzhou Railway Station. One attacker was shot dead and another was wounded and captured. Some witnesses said there was a third attacker who fled – a claim police denied.

The previous night, two Uygur women armed with knives were shot dead in Guangzhou’s Baiyun district, an area that had become a meeting place for Uygurs in recent months, according to the document. But this incident was not reported.

Professor Yang Shu, an expert on Central Asia at Lanzhou University in Gansu province, said it was hard to assess security risks of further attacks in major Guangdong cities such as Guangzhou and Shenzhen “because we don’t know how many have fled”.

He said more Uygurs were fleeing the country via Guangdong’s waters. “The smuggling routes in southern Chinese waters are very hard to intercept so they are preferred to the land crossings to Central Asia that have very strict border control,” Yang said.

Reports of Chinese Uygurs leaving the country to join Islamic State started to emerge a year ago. Earlier this year, Malaysian authorities said that more than 300 Chinese nationals had used Malaysia as a transit point to join up with Islamic State.

Malaysian Home Affairs Minister Ahmad Zahid Hamidi told local media that these Chinese nationals would go to a third country from Malaysia before entering Syria and Iraq. Chinese authorities say an unknown number of its citizens had received combat training from IS, posing a concern for Beijing.

Author of the book "Tiananmen's Tremendous Achievements" about how with the help of Tiananmen Protests, talented scholars with moral integrity seized power in the Party and state and brought prosperity to China. The second edition of the book will be published within a few days to mark the 25th anniversary of Tiananmen Protests All the parts in the first edition remain in the second edition with a few changes due to information available later and better understanding. There are also some changes for improvements of style. The new parts are Chapters 12-19 on events in China after the first edition was published: The fierce power struggle for succession between reformists and conservatives; Xi Jinping winning all elders’ support during his mysterious disappearance for 2 weeks in early September, 2012; and Xi Jinping Cyclone. Chan Kai Yee's new book: SPACE ERA STRATEGY: The Way China Beats The US An eye-opening book that tells the truth how the US is losing to China. The US is losing as it adopts the outdated strategy of Air-Sea Battle while China adopts the space era strategy to pursue integrated space and air capabilities: It is losing due to its diplomacy that has given rise to Russian-Chinese alliance. US outdated strategy has enabled China to catch up and surpass the US in key weapons: Hypersonic weapons (HGV) that Pentagon regards as the weapon that will dominate the world in the future. Aerospaceplane in China’s development of space-air bomber that can engage enemy anywhere in the world within an hour and destroy an entire aircraft carrier battle group within minutes. Anti-satellite (ASAT) weapons, anti-ASAT weapons, stealth aircrafts, drones, AEW&C, etc. The book gives detailed descriptions of China’s weapon development based on information mainly from Chinese sources that the author monitors closely. U.S. Must Not Be Beaten by China! China is not a democracy. Its political system cannot prevent the emergence of a despotic leader or stop such a leader when he begins to bring disasters to people. A few decades ago, Mao Zedong, the worst tyrant in world history did emerge and bring disasters to Chinese people. He wanted to fight a nuclear war to replace capitalism with communism but could not bring nuclear holocaust to world people as China was too weak and poor at that time. If a despot like Mao Zedong emerges when China has surpassed the US in military strength, world people will suffer the misery experienced by Chinese people in Mao era. China surpassing the US in GDP is not something to worry about as China has the heavy burden to satisfy its huge population, but China surpassing the US in military strength will be world people’s greatest concern if China remains an autocracy. US people are of much better quality than Chinese people. What they lack is a wise leader to adopt the correct strategy and diplomacy and the creative ways to use its resources in developing its military capabilities. I hope that with the emergence of a great leader, the US can put an end to its decline and remain number one in the world. China, US, space era strategy, air-sea battle, space-air bomber, arms race, weapon development, chan kai yee
View all posts by chankaiyee2 »
« NGO weighs legal action after Chinese police raid its offices
‘Made in China’ tops the EU’s most unsafe list »