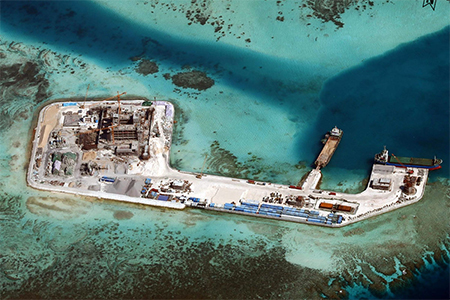 China has begun building a runway on reclaimed land on the Fiery Cross Reef, according to IHS Jane’s.

More than 11,000 soldiers from the Philippines, U.S. and Australia began joint drills in the South China Sea, as the Philippines’ military chief called China’s building work on disputed reefs “worrisome” and a source of friction with its neighbours.

The reclamation “will cause tensions among claimant countries not only because it could deter freedom of navigation but also due to its possible military purposes,” General Gregorio Pio Catapang told reporters in Manila on Monday. China must “stop the reclamation activities and be mindful of its responsibilities as a claimant state and an important member of the international community.”

The comments come as 11,600 Filipino, U.S. and Australian soldiers — twice as many as last year — start war games off Palawan province near contested South China Sea islands. Disputes over the sea, of which China claims about four-fifths under a so-called nine-dash line drawn on a 1940s map, have escalated as China expands the reach of its military to back its territorial interests.

China’s actions have caused uneasiness for neighbours such as Vietnam and the Philippines who also claim some of the waters. It has also raised concern among countries that use the sea lanes for trade and commerce, Catapang said. “The size of this reclamation is making us wonder what the real intention is,” he said.

The military drills seek to “improve our interoperability and enhance our national defence capability,” Foreign Affairs Undersecretary Evan Garcia told reporters after the opening of the annual Balikatan — shoulder-to-shoulder in Filipino — war games on Monday. “Our armed forces needs to improve its own capacity in order to better serve and protect our country.”

Catapang said the drills are not directed against China. He said a U.S. plan to deploy advanced air force and naval equipment in the Philippines is in the works.

“We will offer them facilities that we can jointly use because of the situation now obtaining in the West Philippine Sea,” Catapang said, referring to the South China Sea.

Foreign Affairs Secretary Albert del Rosario last week said the Philippines is seeking increased support from the U.S. “in terms of being able to take a stronger position.” “The Philippines is saying we should get together and study how we can uphold the rule of law together,” he told ABS-CBN News Channel.

China has often stated its right to carry out construction work in the South China Sea, with recent satellite photos showing images of Chinese dredgers at work at Mischief Reef in the Spratly Islands, a feature also claimed by Vietnam, the Philippines and Taiwan.

The Philippines has enough troops in areas it occupies, and will follow the rules, Catapang said. “Diplomacy will always be the top priority of the government.”

Philippine President Benigno Aquino will bring up China’s reclamation work at the Association of Southeast Asian Nations summit in Malaysia next week, Foreign Affairs Assistant Secretary Luis Cruz told reporters on Monday in Manila. “We would always aim for a collective statement, this time on the issue of the reclamation of some features in the South China Sea,” he said.

Cruz said Vietnam had sought a meeting with Aquino at the summit, with the South China Sea tensions high on both countries’ agenda.

Catapang showed new aerial photos of China’s building work that he said is causing widespread damage to biodiversity and ecological balance. The destruction of 300 acres of coral reef systems will cause economic losses to coastal states worth $100 million annually, he said. China has begun building a runway on reclaimed land on the Fiery Cross Reef, according to IHS Jane’s.

Catapang also accused China of tolerating environmentally harmful fishing practices by its fishermen occupying Scarborough Shoal. Conflicting claims must be addressed peacefully “so that we don’t unnecessarily provoke each other and create instability in the region,” the military chief said.

Chinese boats drove away at least 80 Filipino fishermen from the shoal on April 9, the Inquirer newspaper reported. The government is still confirming that report, Communications Secretary Sonny Coloma said at a briefing in Manila.

China News is a collection of original and reposted news and articles about China, collected from the best sites around the web. It is also a place for writers about China to promote their own sites.
View all posts by China News »
« Three ways the rise of China’s stock market might change the world
Cadence of Conflict: Asia, April 20, 2015 »