Taiwan’s leader uses term “Republic of China” to mainland China’s leader Xi Jinping, despite threats by China to invade Taiwan if they ever use that name 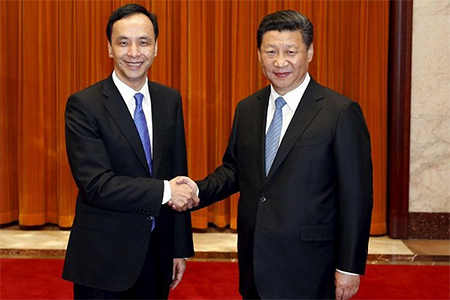 Taiwan’s United Daily News says in its report on the meeting between the Chinese Communist Party (CCP) leader Xi Jinping and Taiwan’s KMT leader Eric Chu today that Zhu mentioned the “Republic of China” in the face of Xi Jinping.

There is a strict understanding that Taiwan will never use that name when dealing with mainland China in an official capacity. China has even threatened to attack Taiwan if it does use that name.

Zhu played the trick to mention the “Republic of China” by saying, “I recall that 100 years ago, Dr. Sun Yet-sen overthrew the imperial system and founded the Republic of China.” Xi could not oppose that historical fact.

According to various Taiwan and Hong Kong media reports, Taiwanese people are happy that Xi did not respond to the mentioning of the Republic of China when Chu mentioned it.

There has been a “92 Consensus” between the CCP and Taiwan’s ruling party, the Kuomintang (KMT), which means that both China and Taiwan admit that there is only one China but each has its own interpretation of the “one China.”

In reaching the 92 consensus in 1992 between the two sides, each has made great concession.

If there were two Chinas, i.e. the PRC and ROC both as independent states, Taiwan would be able to have diplomatic relations with the US, EU members, Japan and most other countries in the world.

Taiwan is unable to be independent as the PRC will attack it by military force while the US would not defend it.

If Taiwanese people really understood the 92 Consensus, there is nothing for them to be happy about as due to the Consensus the PRC allows Taiwan to regard itself as the Republic of China.

The situation across the Taiwan Strait is now quite tricky. Most Taiwanese people regard themselves as Chinese so that they are happy that Taiwan is the Republic of China. They want to maintain Taiwan’s democratic political system but do not want to be independent in order to avoid being attacked by the PRC and maintain the great economic benefits it is gaining from the PRC.

In the past, Vietnam, Korea, Liuqiu and others all regarded China as their suzerain because China protected them and gave them gifts without interfering in their internal affairs.

They separated their ties with China when China was weak or interfered with their internal affairs.

Source: United Daily News – “Eric Chu mentioned the ‘Republic of China’ in the face of Xi Jinping, who did not respond to that” (summary by Chan Kai Yee based on the report in Chinese)

Author of the book "Tiananmen's Tremendous Achievements" about how with the help of Tiananmen Protests, talented scholars with moral integrity seized power in the Party and state and brought prosperity to China. The second edition of the book will be published within a few days to mark the 25th anniversary of Tiananmen Protests All the parts in the first edition remain in the second edition with a few changes due to information available later and better understanding. There are also some changes for improvements of style. The new parts are Chapters 12-19 on events in China after the first edition was published: The fierce power struggle for succession between reformists and conservatives; Xi Jinping winning all elders’ support during his mysterious disappearance for 2 weeks in early September, 2012; and Xi Jinping Cyclone. Chan Kai Yee's new book: SPACE ERA STRATEGY: The Way China Beats The US An eye-opening book that tells the truth how the US is losing to China. The US is losing as it adopts the outdated strategy of Air-Sea Battle while China adopts the space era strategy to pursue integrated space and air capabilities: It is losing due to its diplomacy that has given rise to Russian-Chinese alliance. US outdated strategy has enabled China to catch up and surpass the US in key weapons: Hypersonic weapons (HGV) that Pentagon regards as the weapon that will dominate the world in the future. Aerospaceplane in China’s development of space-air bomber that can engage enemy anywhere in the world within an hour and destroy an entire aircraft carrier battle group within minutes. Anti-satellite (ASAT) weapons, anti-ASAT weapons, stealth aircrafts, drones, AEW&C, etc. The book gives detailed descriptions of China’s weapon development based on information mainly from Chinese sources that the author monitors closely. U.S. Must Not Be Beaten by China! China is not a democracy. Its political system cannot prevent the emergence of a despotic leader or stop such a leader when he begins to bring disasters to people. A few decades ago, Mao Zedong, the worst tyrant in world history did emerge and bring disasters to Chinese people. He wanted to fight a nuclear war to replace capitalism with communism but could not bring nuclear holocaust to world people as China was too weak and poor at that time. If a despot like Mao Zedong emerges when China has surpassed the US in military strength, world people will suffer the misery experienced by Chinese people in Mao era. China surpassing the US in GDP is not something to worry about as China has the heavy burden to satisfy its huge population, but China surpassing the US in military strength will be world people’s greatest concern if China remains an autocracy. US people are of much better quality than Chinese people. What they lack is a wise leader to adopt the correct strategy and diplomacy and the creative ways to use its resources in developing its military capabilities. I hope that with the emergence of a great leader, the US can put an end to its decline and remain number one in the world. China, US, space era strategy, air-sea battle, space-air bomber, arms race, weapon development, chan kai yee
View all posts by chankaiyee2 »
« Chinese media says China’s hypersonic missiles can neutralise America’s ICBMs
US “grand strategy” for war against China »