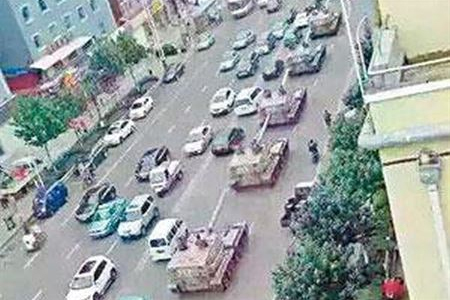 PLA tanks pass through Yanji near the China-North Korea border.

The People’s Liberation Army has sent troops to China’s border with North Korea as escalating tensions on the Korean peninsula have pushed North and South to the brink of possible war.

The Hong Kong-based Oriental Daily reported Saturday that internet users have been uploading photos of what appear to be PLA armoured vehicles and tanks passing through the streets of Yanji, the seat of the Yanbian Korean autonomous prefecture in eastern Jilin province. The city, considered a key transport and trade hub between China and the DPRK, is less than 30 kilometres from the 1,400-kilometer border.

The military deployment is believed to reflect how seriously Beijing considers the the current standoff between North and South Korea. Delegates from Pyongyang and Seoul have agreed to continue talks at 3 pm Sunday local time after the first high-level dialogue between the two sides in nearly a year was adjourned following a marathon 10-hour session.

The talks began around 6:30 pm on Saturday shortly after the passing of Pyongyang’s deadline for Seoul to cease broadcasting anti-DPRK propaganda across the demilitarised zone through loudspeakers. Pyongyang had declared that its frontline troops were prepared to go to war if Seoul did not back down and an unnamed official from South Korea’s defence ministry has reportedly said that his government will only discontinue the broadcasts if there is an acceptable outcome from the talks.

The loudspeaker broadcasts began from the South after a land mine attack — for which the South has blamed the North — injured two ROK soldiers. On Thursday, the South Korean military fired dozens of artillery rounds across the border in response to North Korean artillery strikes, in turn supposedly in response to the South’s broadcasts. As usual, Pyongyang has denied being behind both the land mine attack and the artillery strikes while keeping up its standard “sea of fire” rhetoric.

The standoff also comes amid annual military exercises between the US and South Korea, which the North claims is part of a preparation for invasion.

On Aug. 21, Chinese foreign ministry spokesperson Hua Chunying said that China is following “the situation of the Korean peninsula very closely and is deeply concerned about what has happened recently.”

“China staunchly safeguards regional peace and stability and opposes any action that may escalate tension. We urge relevant parties to remain calm and restrained, properly deal with the current situation through contact and dialogue, and stop doing anything that may make the tension even worse,” Hua said, adding that the Chinese side is “willing to work with relevant parties to jointly ensure peace and stability of the Korean peninsula.”

China’s Global Times tabloid has tried to downplay the risk of military conflict, stating in an editorial: “The South and North are not willing to start a full-scale war, and no one is instigating a war. As a result, the new round of friction may not be explosive and can be dissolved by previous experiences. After all, escalation will do no good to either side.”

The Korean Central News Agency, North Korea’s state news agency, has hit back at China’s calls for restraint, saying, “We have exercised our self-restraint for decades. Now no one’s talk about self-restraint is helpful to putting the situation under control.”

China News is a collection of original and reposted news and articles about China, collected from the best sites around the web. It is also a place for writers about China to promote their own sites.
View all posts by China News »
« China wants great power without great responsibility
Cadence of Conflict: Asia, August 24, 2015 »