China’s meltdown shows the country is out of control 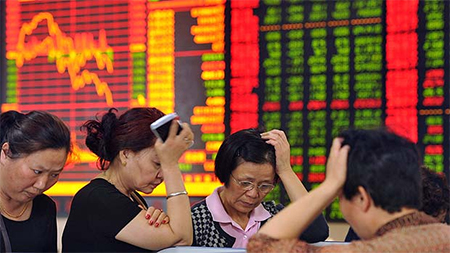 The world’s second-largest economy may be able to stem a financial crisis, but don’t count on it to stimulate the world’s economy.

Global stock markets have rebounded after the shock of Black Monday, but worries over the Chinese economy are not over, in fact they are just beginning.

The People’s Bank of China’s move on Tuesday to cut interest rates by 0.25% is another sign that China’s economic growth is weaker than previously expected.

After the devaluation of the renminbi earlier this month that caused a potential liquidity problem in the banking system, the market expected the PBoC to cut interest rates and reserve ratio as a routine step.In fact, the market expected the rate cut would have been announced last weekend, and the delay of the announcement obviously contributed to the plummet of the market on Monday and Tuesday.

The view that the economic reforms President Xi Jinping’s government have promised are not going to happen is now widely accepted. Instead it is returning to the old broken growth model of cheap exports, capital investment and greater control for the state owned enterprises (SOEs) despite knowing it can’t be sustained – there are only so many roads and high rise towers a country needs, even China.

When President Xi took office in 2012 and spoke of the ‘Chinese Dream’ it was expected his government would try to rebalance the economy by growing domestic demand and decreasing the income gap between richer eastern regions and poorer western regions. But the recent break-out of negative news on the economic outlook makes the dream much more remote. This negative news has put a lot of pressure on the government so it seems it is giving up long-term reform efforts.

Chinese growth is still largely investment driven, after so many years of considering a “soft-landing” of the economy because the government is still afraid that insufficient GDP growth would arouse social unrest. That is why it has returned to its old model as a short-term fix to reach its target of 7% GDP growth for this year, but the last government has already shown this strategy can’t be sustained.

The Chinese stock market was driven up by the promise of the government that economic reform will be going on, and naturally when this promise breaks, the market crashes. Meanwhile, stock market regulators seem to have given up on direct intervention, as, after trying to prop it up, they have learnt they cannot buy all the stocks in the market.

Meanwhile, Europe, the UK and U.S. stock markets all significantly rebounded on Tuesday; they were clearly over-sold on Monday. The Chinese stock market is not correlated with the rest of the world due to capital flow controls. Global investors perhaps don’t care what goes on in the Shanghai Composite Index; they care more about the growth of China.

In the long-term, China needs to reform and rely more on organic growth of domestic demand. They should try to give more support to the private sector, as opposed to continually relying on state-owned enterprises. They should decrease transaction costs by reducing regulation that typically gives these enterprises an advantage and enhance protection of private businesses (especially in the poorer western regions); but that all seems a long way off at the moment.

Instead, state-owned enterprises have shown their large ‘hindering’ power, by squeezing the room for private investment. Even Alibaba has suffered this power recently. The online shopping portal has revolutionised how the Chinese shop with its online payment system, but now that the online payment system has become an important part of a Chinese shopper’s everyday life, the state-owned banks are interested in sharing the profit.

The regulators of Chinese banks are trying to participate in the online payment system through tighter regulation, so the business has to be done through SOE banks. This type of control will not only harm Alibaba but restrict future development of the whole market of online transactions.

The scope of state-owned enterprises needs to be limited, so more is left to the market. However, these enterprises have a very important presence in the government hierarchy and the decision-making process, so they will protect their own interests.

State-owned enterprises are only part of the reason why carrying out economic reforms is so difficult even though it is widely agreed that there should be some reforms. Things become even harder when the government is also targeting a GDP growth rate at the same time.

In the long-term, if these reforms do not happen, China is not creating its own demand. It has long been expected that China would grow its own demand. With such a large population, markets globally would benefit. But if China is slowing down and reform is more remote, it is bad news for everybody and the global economy will lose an important part of future demand. It leaves the distinct possibility that global demand is going to stagnate, and it is something that is very difficult to cure. You can solve a financial crisis, but how can you stimulate global demand?

The Eurozone’s ongoing economic woes is due to a lack of demand, because Germany has the largest trading surplus but is not spending much, while the other Eurozone countries simply do not have enough money to spend. The Eurozone is doing better now because it turned to a massive bond-purchasing program called quantitative easing (QE) to stimulate the economy, so demand is increasing.

But QE is something China cannot do because it is too much of a risk in its banking system, as it is not transparent and has not been tested. The PBofC would plan further cuts on interest rates and the reserve ratio, but that’s all it can do. It is too early to predict a global stagnation caused by China slowing down, but it is not too early to prepare for the worse-case scenario.

Lei Mao is an assistant professor of finance at Warwick Business School in the United Kingdom and researches corporate finance.

Source: Fortune – China’s meltdown shows the country is out of control

China News is a collection of original and reposted news and articles about China, collected from the best sites around the web. It is also a place for writers about China to promote their own sites.
View all posts by China News »
« China’s new long-range rocket artillery can hit moving targets at sea and repel invading navy
China’s newest powerful anti-ship missiles can sink Aegis destroyer »