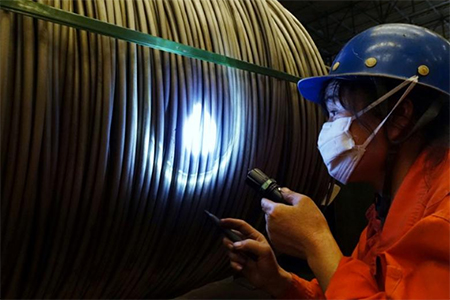 The European Union has launched a new investigation into whether Chinese manufacturers are selling steel into Europe at unfairly low prices, angering China which says Europe’s steel problems are due to the region’s own economic weakness.

The European Commission has determined that a complaint brought by EU steel makers’ association Eurofer regarding certain corrosion resistant steel merits an investigation, the EU’s official journal said on Friday.

The Commission also said it would start another anti-dumping investigation into certain cast iron products from China and India as well as determining whether existing duties on Chinese steel seamless pipes and tubes should continue for another five years.

The EU has already imposed duties on a wide range of steel grades to counter what EU steel producers say is a flood of steel sold at a loss due to Chinese overcapacity and partly the cause of 5,000 British job losses.

A China Commerce Ministry official said Beijing attached a “high degree of attention and concern” to the case and that Europe’s steel problems were due to its own weak economic growth.

Wang Hejun, the head of the trade remedies investigation department, said in a statement on the ministry’s website that Europe should rationally analyse its steel industry’s problems.

“It should not adopt mistaken trade protectionist measures that limit fair market competition,” he said.

The EU investigation begins just days before the 15th anniversary of China’s accession to the World Trade Organisation, when the country says new trade defence rules are supposed to kick in.

Until now, the EU has been able to compare Chinese prices with those of another country – in the current case Canadian prices. But, Beijing insists this should no longer be possible from Dec. 11.

If the United States, European Union, and other WTO members begin to take Chinese prices as fair market value, it will be much harder for them to challenge China’s cheap exports.

The European Commission proposed last month a new way of treating China, but its proposals still await approval from the EU’s 28 members and the European Parliament.

Aegis Europe, a group of European industry federations including Eurofer, said there was no legal requirement to change the way the EU treated China on Dec. 11 and that EU’s partners the United States and Japan would not be doing so.

G20 governments recognised in September that steel overcapacity was a serious problem. China, the source of 50 percent of the world’s steel and the largest steel consumer, has said the problem is a global one.

The EU currently has 40 anti-dumping and anti-subsidy measures in place, 18 of which are on products from China. Twenty more investigations related to steel are still ongoing, including three for which provisional duties are in place.

(Reporting By Philip Blenkinsop in Brussels, Yawen Chen and Nicholas Heath in Beijing,; Editing by Greg Mahlich and Jane Merriman)

China News is a collection of original and reposted news and articles about China, collected from the best sites around the web. It is also a place for writers about China to promote their own sites.
View all posts by China News »
« China flies nuclear-capable bomber in South China Sea after Trump Taiwan call
Cadence Column: Asia, December 12, 2016 »