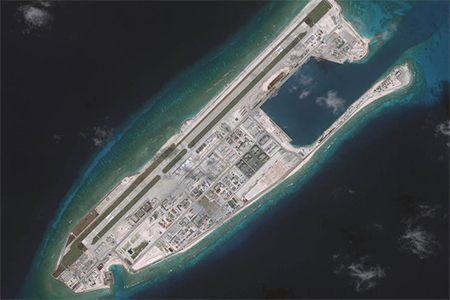 President-elect Donald Trump’s nominee for secretary of state said China must be denied access to artificial islands built in the South China Sea, a move that would raise the risk of conflict between the world’s biggest economies.

Hours into a confirmation hearing with the Senate Foreign Relations Committee, where he was grilled extensively about his views on Russia, former Exxon Mobil Corp. chief Rex Tillerson said that a failure to respond to China’s actions had allowed it to “keep pushing the envelope” in the South China Sea.

“We’re going to have to send China a clear signal that first the island-building stops and second your access to those islands is also not going to be allowed,” he said when asked whether he would support a more aggressive posture in the South China Sea. He compared China’s actions to those of Russia in the Crimea.

The remark is the latest from Trump’s administration to signal a more aggressive defense posture against China in addition to calls for a tougher line on trade. Trump earlier questioned the U.S.’s policy of recognizing Beijing over the government in Taiwan, and criticized China’s ties with North Korea.

China pushed back against Tillerson’s comments on Thursday even while saying it agreed with him on areas of cooperation between the two countries. On Monday, Alibaba Group Holding Ltd. Chairman Jack Ma met with Trump and discussed plans to create 1 million new jobs in the U.S. by helping small businesses sell goods to China.

“Like the U.S., China has the right within its own territory to carry out normal activities,” Chinese Foreign Ministry spokesman Lu Kang said at a regular briefing in Beijing in response to a question on Tillerson’s remarks. “That is within the limits of its sovereignty.”

Tillerson offered no detail about how the U.S. could stop China from building islands, or prevent access, but in recent years the U.S. has consistently conducted freedom of navigation operations throughout the area.

‘Fuel on the Fire’

“This is the sort of off-the-cuff remark akin to a tweet that pours fuel on the fire and maybe makes things worse,” said Malcolm Davis, a senior analyst at the Australian Strategic Policy Institute in Canberra. “Short of going to war with China, there is nothing the Americans can do.”

China claims more than 80 percent of the South China Sea, where it has constructed artificial land features on seven rocks and reefs, and installed military facilities. Vietnam, the Philippines, Brunei, Malaysia and Taiwan also claim parts of the same area, through which more than $5 trillion of trade passes each year.

Tillerson also said he would stand by U.S. defense treaties with Japan and South Korea. These had been in doubt after Trump said in an interview in March last year that he would consider withdrawing U.S. troops if the allies didn’t pay more for their upkeep. Asked whether he agreed with Trump’s assertion that it wouldn’t be a bad thing for the U.S. if Japan and South Korea acquired nuclear weapons, Tillerson said he “did not agree.”

The nominee also appeared to suggest he would maintain a U.S. pledge to defend Japan-administered islands close to Taiwan against any military take-over by China, which also claims them. Japanese and Chinese ships and planes frequently tail one another around the uninhabited islands known as Senkaku in Japan and Diaoyu in China.

“We have long-standing ally commitments with Japan and South Korea in the area and I think we would respond in accordance with those accords,” he said. “Certainly we have made commitments to Japan in terms of a guarantee of their defense.”

General Manager at Craig Hill Training Services * Get an Australian diploma by studying in your own country * Get an Australian diploma using your overseas study and work experience * Diplomas can be used for work or study in Australia and other countries. * For more information go to www.craighill.net
View all posts by Craig Hill »
« Cadence Column: Asia, January 9, 2017
Cadence Column: Asia, January 16, 2017 »