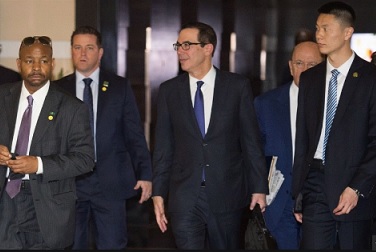 The US-China negotiation atmosphere was not bad 2 days before the American team, which was headed by Treasury Secretary Steven Mnuchin, went to China.

When the delegation team landed on Beijing on May 3 Thursday, “Trump tweeted: ‘Our great financial team is in China trying to negotiate a level playing field on trade! I look forward to being with President Xi in the not too distant future. We will always have a good (great) relationship!’”

On May 4 Friday, Bloomberg even could obtain (actually, was provided with) the lists from the U.S. and China showing what were demanded of each other on trade. The items all looked normal, as expected, and, most importantly, negotiable.

All of a sudden, Mnuchin returned home empty-handed and the anticipated meeting with Xi did not materialize.

Then on May 5 Saturday, the White House “sharply criticized China’s efforts to force foreign airlines to change how they refer to Taiwan, Hong Kong and Macau, labeling China’s latest effort to police language describing the politically sensitive territories as “Orwellian nonsense.” Here is the core of the problem.

Over the past 50 years or longer, when someone needed international postage, delivery or alike, there was a list of ‘countries’ for the user to pick so as to specify the address and pay for the fees accordingly. Before 1997, Hong Kong and Macau were colonies, and Taiwan was outside the jurisdiction of the People’s Republic of China after the CCP-KMT civil war 1945-9. Therefore, many other countries’ firms put China (PRC), Taiwan, Hong Kong and Macau on the list separately so as to arrange for different transportation routes and other issues such as tax and customs. As Beijing was relatively weak, it had no say about it.

After 1997, Hong Kong and Macau are special administrative regions (SAR) of China. Hong Kong, for example, is part of China, and therefore the official name is China-Hong Kong SAR. Obviously, Beijing is making an effort to take one step further by asking those nations who adopt the ‘One China Policy’ to change the status of Taiwan in that list to become ‘China-Taiwan’.

As the sovereignty issues in Hong Kong and Macau have been very definite and clear, what remains is Taiwan’s. Since it was the White House, at its highest height, to criticize Beijing’s request for modifying the country list for the purpose of recognizing China’s sovereignty over Taiwan Island, it means a lot. Among other things, one point is urgent and clear: the Trump administration and Washington as a whole are going to stir up trouble between Beijing and Taiwan, as what I said as early as in Jan and again in Feb.

When the White House is willing to abandon a chance for success at the beginning stage of the trade talk for this dispute, it carries at least two implications. One is that even China has made concessions on the trade front, Washington will demand more if Beijing wants something elsewhere in spite of the ‘smallness’ of such a request regarding a country list.

Another one is that Washington has already determined to irritate Beijing to the extent that it must take military force against Taipei.