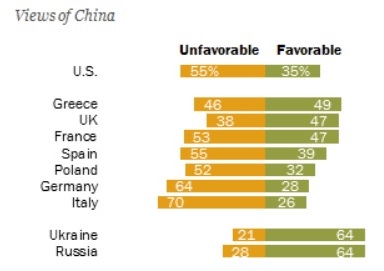 Ratings for China in some European nations 2014 (findings and picture from Pew Research Center: Global Opposition to U.S. Surveillance and Drones, but limited harm to America’s image, Chapter 2 http://www.pewglobal.org/2014/07/14/chapter-2-chinas-image/ )

Further to the Pew Research’s 2014 finding that “…The ‘China threat’ in particular looms large in many American minds”, a new study finds that “trade and China”, alongside “immigration”, carried heavy weight in having Donald Trump elected as the President in 2016.

The research paper approved on March 26, 2018 by the Proceedings of the National Academy of Sciences of the USA (PNAS) rejects the working class’ “left behind” thesis, and argues that “status threat felt by the dwindling proportion of traditionally high-status Americans (i.e., whites, Christians, and men) as well as by those who perceive America’s global dominance as threatened combined to increase support for the candidate who emphasized reestablishing status hierarchies of the past.”

One of this paper’s highlights is that “… in 2011, 38% of Americans endorsed the view that ‘[t]he US stands above all other countries in the world; by 2014, that same percentage was down to 28%. This drop has been most precipitous among Republicans…” The author, Professor Mutz of University of Pennsylvania, concludes that “Trump’s emphasis on these particular issues in his campaign increased the salience of international affairs … Because globalization itself is unlikely to wane, these are likely to remain important electoral issues for the foreseeable future.” [Note]

So, if President Trump is able to press down the ‘China threat’, real or perceived or both, he would be regarded by many Americans as a great president. I am of the view that he is doing great. No, I am not sarcastic. I really mean it and I have been holding this view since mid-2017. One of his great achievements is to pull China up as the top concern for national security to replace terrorism.

According to Realism, you must press down your potential opponent when it is not yet strong enough to challenge your status. It is exactly what a sensible American president should do to protect his/her own country. The Beijing leaders would not blame Trump, the almost the same logic that Trump did not blame China for the trade deficit (Trump blamed the previous presidents) because it is very natural for anyone to make as much as profits he/she can.

So, looking forward, Beijing is doing a comprehensive risk calculation to assess how, when and where Washington is going to weaken China, and how Trump would make use of the ‘China Threat’ to make himself a great president in American history. Brad Glosserman of the Center For Strategic and International Studies points this out in his March 26 article that while some analysts see the deterioration in the US-China relations in 2018 a temporary phenomenon, “there are good reasons to believe this downturn has robust structural causes, constitutes a real change in relations, and is not another temporary downturn that will soon reverse itself”.

The Taiwan issue is by now the most likely area through which China is to be weakened. Michael Mazza of the American Enterprise Institute, for example, suggests in his May 9 paper that Washington should do in five ways to help Taiwan. The National Interest Magazine even publishes in-depth analyses on it at least once weekly since March 2018. Therefore, it is not a surprise that “China jets fly around Taiwan again and again for “training”.

When the Beijing-Taipei civil war breaks out, Trump’s response, if he is in the White House for a second term, will be one of the decisive factors that may make him one of the greatest presidents in American history.