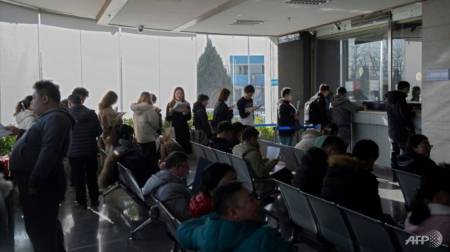 Cracks are opening in China’s mighty economy: investors are backing away from deals, factories are moving abroad and companies are shedding jobs.

While gross domestic product grew at 6.6 per cent in 2018 – a rate that would be the envy of most nations – China’s efforts to cut its debt mountain have weighed on the economy.

Private businesses in particular face new hurdles as costs rise and financing becomes harder to come by, while the trade war with the United States has not helped.

Here is a look at some of the struggles faced by Chinese companies and people:

GAME OVER FOR GAMERS

The game allows players to harvest wheat, raise chickens and plant apple trees – a bucolic refuge from the pressures of urban China.

But in real life, the tech firm has struggled to find investors.

“In December our company’s funding ran out, we had an investment lined up, but the money never came through,” said chairman Cui Yi.

“This month I arranged another investor, then he backed out too. I think we can’t hold out.”

His company is not alone.

Venture capital funding dried up at the end of last year. Total investment in the fourth quarter fell 13 per cent from a year earlier, according to data from Preqin market research.

Policymakers are partly to blame, pushing a war on debt and financial risk that has cut the funding flowing into investment firms, industry insiders say.

Other companies are facing the fallout from the trade war with the United States.

More than a handful of exporters have sought to get around US tariffs by building factories outside China, according to a review of public stock filings.

Others are sending workers home early for Chinese New Year or cutting overtime.

“It has hit our profits,” Harry Shih, manager of Runfine Bearings in eastern Zhejiang province, said of the trade war.

Washington slapped 25 per cent taxes on many types of ball bearings in July. Shih said he had shared the cost increase with his customers, roughly half of whom are from the US.

“Business is going down for most companies including factories. Like me they have the same problems, profits are going down” as costs rise, said Shih.

DEARTH FOR A SALESMAN

“Volumes have fallen by half,” said Wang Jingjing, a fast-talking 23-year-old salesman at a Ford dealership in Beijing, noting about one third of the salespeople had been fired or left.

“I’ve definitely controlled my own spending, going out to eat less, buying less, cutting down on these things,” he said, adding he believes things will turn around this year with new car models coming out.

In October-December advertised tech positions fell by 20 per cent from a year earlier, after declining 51 per cent in the third quarter, according to data from Zhaopin, China’s largest recruitment website and Renmin University.

China’s economy “faces downward pressure, and to some extent this pressure will be transmitted to the job market,” said Meng Wei, a spokeswoman for the National Development and Reform Commission, China’s state planner.

A lawyer who consults on labour disputes, Guo Xuehai of Beijing Zhonghai Law Firm, said, “there are definitely more employees coming for help than before,” but added this was usually the case at this time of the year.

At Beijing Yixin, Cui said he could only afford to pay his 30-odd employees 70 per cent of their salaries as money ran out in November. By December he paid them nothing and this month he cut their insurance and benefit plan, unofficially firing them.

“We worked 9am to 9pm plus Saturdays with no overtime pay and now no pay at all,” said a 3D designer surnamed Li, who helped build Farm Take Home.

Employees looking for new jobs have found that companies are not hiring at the moment.

“Hopefully it will be better after Chinese New Year,” Li said.

China News is a collection of original and reposted news and articles about China, collected from the best sites around the web. It is also a place for writers about China to promote their own sites.
View all posts by China News »
« The extreme treachery of the Philipinnes government – we don’t need Chinese workers to take Filipino jobs
Cadence of Conflict: Asia, January 28, 2019 »