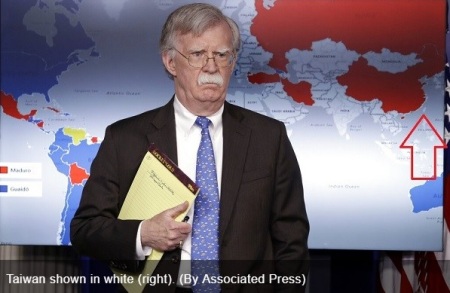 See the red arrow pointing at the ‘white-colored’ Taiwan. It is a sign that Washington does not respect the ‘One-China Policy’ at heart right now (edited photo from Taiwan News).

Surprise?! Ten weeks after the US-backed Juan Guaidó declared himself the ‘interim president’ of Venezuela on Jan 23, Nicolás Maduro’s government is still alive.

Given the 1962 Cuban Missile Crisis and the present US military superiority, neither Russia nor China can act alone to meaningfully obstruct Washington’s move in Venezuela.

Some may argue that Beijing has no choice but to do something as China has already had a vested interest in this oil-rich country.

Nevertheless, Beijing runs against incalculable risk because Venezuela is indeed geographically under the shadow of the US on the one hand, and Beijing is currently fighting an uphill battle in the US-China trade war, on the other.

Therefore, what has made up Beijing’s mind to make a dangerous attempt to worsen the US-China relationship during this sensitive period (the risk includes a no-deal consequence for the trade war)?

It is because of a map ‘error’, I believe. When US National Security Advisor John Bolton presented a world map depicting how different countries reacted to Washington’s endorsement of Juan Guaidó as the interim president, the Taiwan island is in white, not in red.

According to Taiwan News, “… Taiwanese interpreted the differences in color to indicate that the Trump administration supports Taiwan as a separate country …” Obviously, this map ‘error’ has somehow caused negative impact on the US-China relationship.

What we can see so far is China’s persistent tangible support, ranging from assisting Maduro to recover from a country-wide black-out in mid-March, to 65 tons of medical supplies arrival at Venezuela on March 30 which is a determined “move after Russia sent humanitarian aid to Caracas last week …”

It is still too early to say how the Venezuelan crisis may end. However, to China, it is a highly valuable experiment. If the Maduro government could finally survive with the joint supports from Russia and China, it would greatly strengthen Beijing’s confidence in confronting Washington in future. Map is always important in international politics, and we should never underestimate the impacts of any tiny ‘error’, be it intended or unintended.