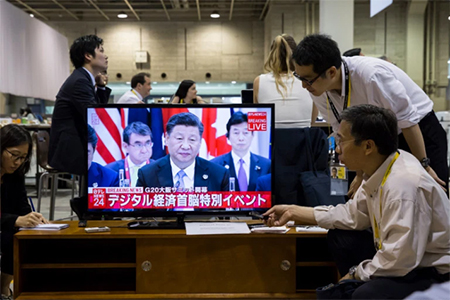 I first traveled to mainland China as a high school student in 2008. Like many observers at the time, I was enthralled by the apparent success of China’s development model, manifested in the urban landscapes of Beijing and Shanghai.

I was influenced by the then-prominent idea of Chinese exceptionalism, which one could encounter in both government propaganda and discussions with local street vendors. My perception of China in the early years reflected that of the foreign-policy community in the United States, as well as that of major U.S. businesses in China. But today, that perception has changed.

The current climate in U.S.-China relations is far colder. But the shift has been driven by the Chinese government long before U.S. President Donald Trump began his trade war. Since Xi Jinping came to power in 2012, China has been a far less welcoming place for foreigners, especially foreign businesses, than it claims to be.

Meanwhile, amid countless examples of unacceptable behavior by Chinese authorities inside the country’s borders, the Chinese government’s propaganda apparatus is operating at full steam in claiming that Chinese citizens and companies are being treated unfairly abroad.

The new milieu in bilateral relations also stems, in part, from the United States’ long overdue reaction to the inequitable ways in which China treats U.S. persons and companies at home and overseas.

My own personal views on China shifted permanently after being stationed at the U.S. Embassy in Beijing as a graduate school intern. While there, I developed an appreciation for the challenges that our diplomatic corps—and, by extension, U.S. citizens and companies—experience on a daily basis.

To call it harassment would be an understatement. Much has been reported on scrutiny of the foreign business community and unjust detention of foreign citizens such as Michael Kovrig, the former Canadian diplomat held as a hostage by China after the United States requested the extradition of a Huawei executive from Canada.

Many are also aware of the almost inevitable surveillance foreigners encounter from the moment they cross the border. Foreigners risk a complete abrogation of their individual rights and any form of legal recourse or due process upon entering the country—putting them, of course, in the same position as the vast majority of Chinese citizens.

But this reality is treated as a given by U.S. diplomats and private citizens living in China. Intimidation, lack of privacy, and worse are par for the course. The muted response to U.S. diplomats in China being subjected to unexplained possible sonic attacks in 2017 and 2018 underscores how such activity has become accepted as normal.

The interrogation of a Koch Industries executive, reported in July, is representative of the typical scrutiny that high-profile foreign businesspeople endure but fail to publicize for fear of retribution or the impact on their bottom line. Even in official high-level meetings, senior U.S. diplomats and business executives are waltzed into Beijing’s Great Hall of the People, subjected to long-winded, talking point-ridden conversations with Chinese counterparts, and then shooed out—usually without any meaningful outcome.

More broadly, foreigners regularly tolerate other less-than-reciprocal arrangements in China. Outside of a few dozen special cases, there is effectively no route to permanent immigration or even established residence in China; even long-term foreign residents often deal with visa issuance on a year-by-year basis. Foreign employees are forced to pay into a pensions and social security system that no one, so far, has been able to tap into.

Foreign journalists, who are private citizens permitted to work in China, are treated as covert operatives of their country of origin and routinely have their visas revoked for doing their job.

China uses visa status, business licensing approvals, and professional credentials as political tools, rewarding those individuals and companies that toe the government line while banishing those that do not. Chinese state media, meanwhile, is free to spew government-backed narratives and disinformation throughout the Western world. And it’s an open secret that some journalists from Xinhua, China’s main state media agency, operate as spies overseas in the same way as Soviet correspondents once did.

Much of this trend can be attributed to initiatives launched under the reign of Xi Jinping. Upon taking office, Xi was quick to surprise many in the U.S. foreign-policy community, who had believed that the former vice president would lead China in a positive direction. For someone who claimed he would seek a “new type of great power relations,” espousing mutual respect and mutually beneficial cooperation, he has done everything in his power to alienate foreigners.

Reacting to the paranoia sanctioned by the top leadership, local police have doubled their scrutiny of foreigners, including through quotas for expulsions or detentions. Chinese firms, meanwhile, are dealing even more shadily with foreign employees, knowing the authorities will be liable to back them up. Given these dynamics, it is unsurprising that the foreign business community, which has traditionally promoted engagement in times of strategic distrust, began souring on China’s prospects for reform even before the trade war.

Even Mandarin-language study by U.S. students, a former enabler of people-to-people ties, has declined significantly in recent years.

If China wants to be treated as an equal, it can start by giving U.S. citizens in China—and all foreigners, for that matter—the respect it asks for its own citizens in the United States. It is shameful that the United States tolerates the inhumane treatment of U.S. personnel based in China as part of the job, and the State Department ought to establish a red line in this regard instead of sending the standard demarches to the Ministry of Foreign Affairs.

There are plenty of potential responses, including restrictions on Chinese officials’ engagement with American civil society groups and universities or the U.S. Department of Justice taking a firmer stance against China’s disinformation operations. This is an obvious and much-needed measure, and it could set an example for like-minded countries to follow.

But if China stays the current course, foreign businesspeople and others such as myself who were once committed to a vision of China as a great country will have no desire to live on the mainland or speak positively of China abroad. And, more significantly, U.S. and foreign companies will continue to leave the country in droves. In time, China will become an isolated, techno-totalitarian state, with only a few sycophantic foreigners left to be paraded out by official media and claim that China remains open to foreign citizens and businesses alike.

Foreigners living in China used to accept certain realities. Tolerance of censorship and suppression of political dissent, as well as a degree of expected surveillance, appeared to be justified by the ends: that China would one day liberalize, become a responsible stakeholder, and contribute to public goods for the global community.

But this is not Xi’s China. In Xi’s China, anything deemed “foreign” is bad. In Xi’s China, all Muslims are considered terrorists and lack the individual rights granted to Han Chinese. And in Xi’s China, the only end is the supremacy of the Chinese Communist Party—at the expense of Chinese citizens and the rest of the global community.

China ought to start behaving like the benevolent global actor it claims to be. If it doesn’t, it will become a global pariah, risking the instability that it so often professes to avoid.

China News is a collection of original and reposted news and articles about China, collected from the best sites around the web. It is also a place for writers about China to promote their own sites.
View all posts by China News »
« China is deploying drones to spy on the South China Sea like never before
We need to worry about China’s control of world’s pharmaceutical supply »