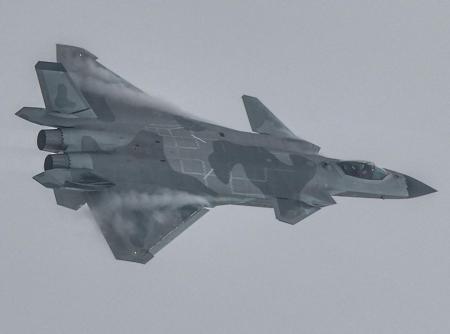 Photos of the J-20 provide an up close and personal look at the fuselage of the new interceptor.

But the photos also appear to show a sensor system that looks awfully similar to the Lockheed Martin Electro-Optical Targeting System (EOTS) on the front of the F-35 Lighting II.

There’s a reason for this: In 2007, Lockheed Martin dealt with something of a cyber Ocean’s 11 when Chinese hackers stole technical documents related to the development of the F-35.

The details on the hack, eventually revealed in documents leaked by Edward Snowden, are just one example of Chinese attempts to steal foreign aviation technology; as recently as 2017, Chinese hackers went after Australian F-35 defense contractors, nabbing even more info on the cutting-edge fighter.

Although the two electro-optical systems pictured above are not identical, they share quite a few similarities in shape and placement: compared to the Eurofighter or Su-57’s electro-optical systems and Infrared Tracking Systems (IRTS), respectively, which are also mounted on top of the fuselage, the differences between the Lockheed Martin and J-20’s Systems are relatively minor.

The system’s positioning under the nose of the aircraft also reinforces that the J-20 is probably designed for both long-range strike missions against ground targets and interceptor duties. However, the J-20 EOTS appears to be less capable than the F-35 equivalent, judging by the size and layout of the J-20 EOTS enclosure.

Much about the J-20 is shrouded in secrecy, but the plane is most likely powered by the same two AL-31F engines which are used in the Su-27, a Russian fighter that is capable of a top speed of Mach 2.3. But the J-20 could also be flying with indigenous (but less reliable) WS-10B engines, due to a lack of Russian engines or as a stopgap until the more powerful WS-15 jet engines are ready for operational use.

And while parts of the design of the J-20 appear to resemble the F-22 and it’s stealthy curves, these similarities could be skin deep as the angularity on the jet inlets and wings remain quite different, and the J-20 lacks all-aspect stealth. Recently the Indian Air Force claimed they could track the J-20 using the Su-30MKIs electronically scanned ‘Phazotron Zhuk-AE’ radar.

Although the J-20 has been pushed into service, recent problems with the J-15 carrier-based fighter suggest that the Chinese answer to the F-22 isn’t quite ready for prime-time despite propaganda from Chinese-owned media outlets that portray the J-20 as a fully-armed and operational battle station. That certainly sounds familiar …

General Manager at Craig Hill Training Services * Get an Australian diploma by studying in your own country * Get an Australian diploma using your overseas study and work experience * Diplomas can be used for work or study in Australia and other countries. * For more information go to www.craighill.net
View all posts by Craig Hill »
« China’s worldwide investment project is a push for more economic and political power
The Chinese threat to American speech »