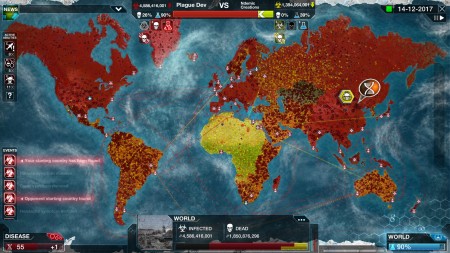 A popular smartphone game that simulates the spread of deadly viruses and diseases around the world has been banned from the Apple App Store by Chinese authorities, according to its developers.

In a statement released Thursday, the maker of Plague Inc. said it was “devastated” over Chinese players not being able to access or play the game.

The company said it isn’t clear whether the game’s removal, which was ordered by the Cyberspace Administration of China, is linked to the spread of a new coronavirus that has dominated world headlines since early January.

To date, the disease has spread to at least 57 countries and has infected more than 85,400 people. At least 2,900 deaths worldwide have been attributed to the virus.

“This situation is completely out of our control,” read developer Ndemic Creations’ statement.

The game, first released eight years ago, has been a top performer on both the App Store and Google Play and has been played by over 130 million users.

According to its developers, Plague Inc. has been “the most popular paid game in China for many years” and is an “intelligent and sophisticated simulation that encourages players to think and learn more about serious public health issues.

The company previously told people to not use the game to predict the spread of the novel coronavirus — which causes a disease dubbed COVID-19 — after its popularity spiked.

“Plague Inc. is a hyper-realistic model of the world,” the game tells its players. “Plan your strategy and evolve your disease accordingly.”

The game models realistic transmission and mutation mechanics of several diseases, with each infection starting off in a single country. It challenges users to spread that infection by adding transmission vectors and mutating it throughout the course of the game.

Ndemic said it’s now working to find a way to get the game back to Chinese players, but that the chances of its return to that market are pretty slim.

“We don’t want to give up on you — however, as a tiny independent games studio in the U.K., the odds are stacked against us,” the statement read.

“Nothing is changing outside of mainland China: we will continue to support and update both Plague Inc. and our newest game Rebel Inc. on all platforms whilst also working hard to try and find a way to bring Plague Inc. back to players in China.”

Don`t worry there is no significant man- made global warming. The global warming scare is not driven by science but driven by politics. Al Gore and the UN are dead wrong on climate fears. The IPCC process is a perversion of science.
View all posts by uwe.roland.gross »
« US says Chinese warship fired military laser at US aircraft
Coronavirus: NASA images show China pollution clear amid slowdown »