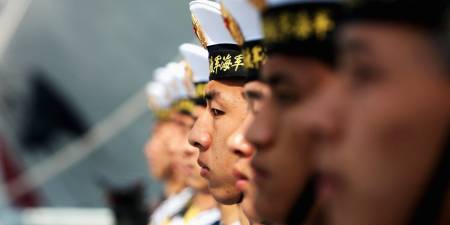 The US Navy warned China on social media after one of the Asian nation’s warships fired a military-grade laser at a US aircraft, telling them: “You don’t want to play laser tag with us.”

US Pacific Fleet said in a statement on Thursday that the Chinese Type 052D Luyang III-class destroyer Hohhot (hull number 161) fired a weapons-grade laser, apparently part of the ship’s close-in weapon system, at a US Navy P-8A reconnaissance aircraft.

“The laser, which was not visible to the naked eye, was captured by a sensor onboard the P-8A,” Pacific Fleet said. “Weapons-grade lasers could potentially cause serious harm to aircrew and mariners, as well as ship and aircraft systems.”

The US has issued a formal protest to China in response to the incident, USNI News reported on Monday, citing Chief of Naval Operations Adm. Mike Gilday.

“The US government demarched China,” he said at an event on Monday.

“It’s the first time we saw it happen from that type of PLA ship,” he said, adding, “We do have protective gear onboard for our pilots, and importantly they’re also trained to deal with it.”

The US military — which has also sent warships to sea to test laser weapons — has had similar problems with the Chinese military in the past.

For example, the Department of Defense accused the Chinese military stationed at the country’s first overseas base in Djibouti of targeting US military aircraft with military-grade lasers in 2018. The Pentagon said the activity posed “a true threat to our airmen.”

A C-130 aircrew is said to have suffered minor eye injuries as a result. The US demarched China over this incident as well.

Source: Business Insider – US Navy warns China ‘you don’t want to play laser tag with us’ after a Chinese destroyer fired a military-grade laser at a US aircraft

China News is a collection of original and reposted news and articles about China, collected from the best sites around the web. It is also a place for writers about China to promote their own sites.
View all posts by China News »
« Cadence Column: Asia, March 2, 2020
China factory activity dives to worst on record as coronavirus paralyzes economy »