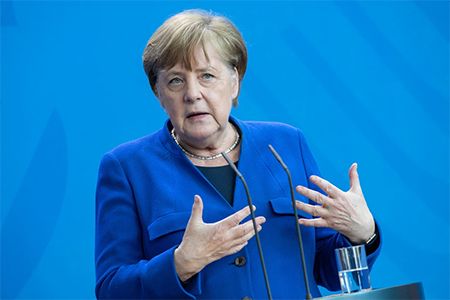 German Chancellor Angela Merkel on Monday joined a growing chorus of countries demanding China tell the truth about the origins of the coronavirus outbreak.

Speaking to reporters in Berlin, Merkel called for the Communist Chinese government to be as transparent as possible as Beijing faces mounting pressure over reports is sought to downplay the virus after learning it would become a pandemic.

“I believe the more transparent China is about the origin story of the virus, the better it is for everyone in the world in order to learn from it,” Merkel said, according to a report by Channel News Asia.

Chinese authorities reportedly waited six days before warning their citizens that the COVID-19 outbreak in Wuhan would likely become a pandemic.

President Xi Jinping warned the public on Jan. 20, nearly a week after officials privately determined on Jan. 14 that the virus had evolved into a pandemic, the Associated Press reported.

Australia also joined the United States in calling for an independent international investigation into China’s response to the deadly COVID-19 health crisis.

Foreign Minister Marise Payne said her concerns about Beijing’s transparency during the crisis were “at a very high point,” and said Australia would “absolutely insist” on a probe.

“The issues around the coronavirus are issues for independent review, and I think that it is important that we do that,” Payne told the Australian Broadcasting Corporation on Sunday.

Last week, French President Emmanuel Macron said it would be “naive” to think Chinese officials handled the virus well, telling the Financial Times: “There are clearly things that have happened that we don’t know about.”

US officials are reportedly investigating whether the virus escaped from a Chinese lab, with President Trump seething in a call with governors on Friday about China’s response.

“I think we should have never been placed in the situation,” he said. “There was a country that should have told us what was happening, and I’m not happy about it.”

China News is a collection of original and reposted news and articles about China, collected from the best sites around the web. It is also a place for writers about China to promote their own sites.
View all posts by China News »
« Cadence Column: Asia, April 20, 2020
As global economies dwindle, world wakes up to China’s hostile takeovers amid pandemic »