Why are countries breaking with the Chinese regime? 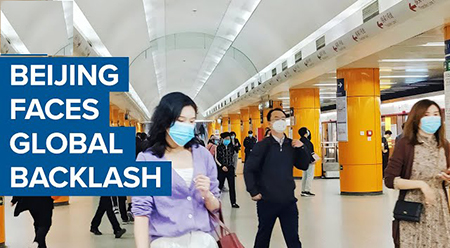 One would think that Beijing would see that unleashing a pandemic is no way to gain favor with the world.

Lying about doing so doesn’t help, either; nor does blaming others for the outbreak.

And exporting tainted medical supplies to nations asking for help, while criticizing them for failing to protect their people from the pathogen doesn’t make for an effective diplomatic strategy, either.

But that’s the playbook, believe it or not, that Beijing is following in its global campaign to become the new leader of the world. Sure, vigorous propaganda blaming the United States, Italy, etc., is part of the plan, too. But few countries, if any, are buying it. There’s just too much toxicity, in all its forms, coming from Beijing.

Is it any wonder that European countries, and others, are now breaking with China?

World Falls Out of Love With China

It’s not that the world was in love with China before the pandemic. The Chinese Communist Party (CCP) had already made great strides toward alienating trading partners around the world.

They did so on a variety of levels, from technology and intellectual property theft to adversarial trading practices, currency manipulation, installing spyware in 5G networks, and much more.

Those are just a few of the reasons why the trend of redirecting supply chains out of China had already begun. President Donald Trump’s massive tariffs on $500 billion worth of Chinese products didn’t help either. They only accelerated the trend, even if casting the United States in a negative light in many European capitals.

But China’s horrific behavior at the beginning of the outbreak has made it—and the CCP—a global pariah. For many countries, the pandemic that the Party unleashed upon the world opened their eyes as to the true nature of the CCP’s outlaw regime. It also showed them how relying on a single supply source has made their economies truly vulnerable.

What is surprising, however, is how badly the CCP is behaving even after having caused the greatest global calamity since World War II. Or, perhaps not. The CCP isn’t known for its surplus of empathy, compassion, openness, goodwill, or any other higher trait of human decency. Contrition, therefore, is not a factor in Beijing’s foreign policy.

It’s quite the opposite, in fact. China’s new breed of diplomats are, with the CCP’s blessing, aggressive, ultra-nationalistic, crude, and dismissive toward their trading partners.

But instead of drawing nations closer to it, China is alienating them, especially the rich Northern European countries:

Sweden has just shut the very last Confucius Institute there and has cut ties with sister cities in China; and the UK and Germany are both reexamining their decision to use Huawei for their nationwide 5G network systems and, along with Australia, are talking about seeking hundreds of billions in reparations from China.

Both the UK and Germany are also concerned about their dependence on China for critical medical supplies and pharmaceuticals; distrust of China is so deep in Germany that its entire China policy is under review; and France has been targeted by China’s disinformation campaign charging French parliamentarians with issuing racial slurs.

Italy is named and blamed by China as a possible source of the virus; and Spain, Holland, and the Czech Republic publicized purchases of defective Chinese masks and testing kits.

Beijing’s bully diplomacy also is backfiring in places such as Australia, which Beijing derogatorily referred to as “gum stuck to the bottom of China’s shoe,” for wanting an investigation into the origin of the CCP virus, commonly known as the novel coronavirus. Fortunately, even with Beijing threatening to boycott their wine and beef, Australia hasn’t backed down.

Kazakhstan, Nigeria, Kenya, Uganda, Ghana, and the African Union have all complained about the Chinese regime’s racists treatment of Africans in Guangzhou province.

But where’s the United States on decoupling from China?

It’s clear that today, the chances for any long-term cooperative partnership between Washington and Beijing are virtually nil. China has shown that it is a strategic adversary to the United States, as well as to the West as a whole. Beijing seeks to reorder the world on its own terms, a plan that threatens the well-being of the rest of the world, and it’s now a plain fact.

That is why the trade war against China was—and continues to be—a necessity. Changing the unbalanced terms was needed to save American manufacturing, U.S. strategic capabilities, its economy, America’s global leadership, and the current international norms, as rickety as they may be. Most of Europe is beginning to agree.

And while Philadelphia’s leadership still sees the need to raise the Chinese flag over City Hall in the name of “diversity,” some American universities, similarly to Sweden, are closing Confucius Institutes on their campuses.

But as the tariffs continue, and global demand continues to fall due to the CCP virus pandemic, economies around the world will suffer. That in itself may well lead to more conflict between the United States and China, as Beijing scrambles for resources, markets, and, of course, for the CCP’s very survival at home.

China’s new strain of “diplomacy” is what happens when a government starts to believe its own propaganda. But it’s not really new at all. It’s an officially sanctioned position based on old realities, that will make the immediate future more dangerous, not less.

As Zi Zhongyun, an expert on America at the Chinese Academy of Social Sciences, noted recently, Beijing’s “new” aggression toward the West has its roots in the anti-Western Boxer Rebellion of the early 20th century. As long as that “mentality guides Beijing” policymakers, Zi says, “it will be impossible for China to take its place among the modern civilized nations of the world.”

It would appear that the Beijing blowback goes both ways. Is the world ready to reap that whirlwind?

James Gorrie is the author of “The China Crisis” and the blog TheBananaRepublican.com. He is based in Southern California.

Source: Canada Free Press – Video: Why Are Countries Breaking With the Chinese Regime?

Don`t worry there is no significant man- made global warming. The global warming scare is not driven by science but driven by politics. Al Gore and the UN are dead wrong on climate fears. The IPCC process is a perversion of science.
View all posts by uwe.roland.gross »
« Coronavirus has unleashed a ‘tsunami of hate’ across world, says UN chief
Indian and Chinese troops ‘clash on border’ in Sikkim »

One thought on “Why are countries breaking with the Chinese regime?”