In Singapore, a search for a Chinese identity with a little less China 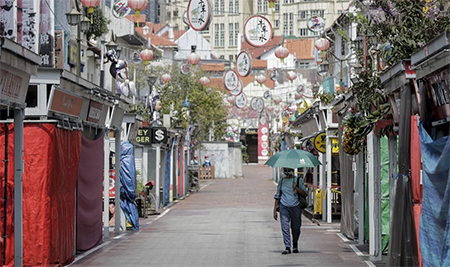 In Singapore, traditional coffee shops are known as kopitiam. The colloquial term is a combination of the word kopi, which means coffee in Malay, and tiam, which translates to shop in Hokkien.

This is just one example of how a melding of cultures gave rise to new words, food dishes, as well as a unique identity in a city state of 5.6 million, where ethnic Chinese make up more than three-quarters of its population.

The evolution of Chinese Singaporean culture and how it was shaped by multiculturalism is the subject of a new permanent interactive exhibition launched earlier this year by the Singapore Chinese Cultural Centre.

The centre opened three years ago and was funded mainly by the government but also through donations from clan associations, businesses and individuals.

“The Chinese Singaporean identity is complex and is always changing,” said the curators. “After interacting with diverse influences over the years, the Chinese culture in Singapore has evolved in a way quite unlike other communities around the world.”

Analysts say the exhibition is part of an ongoing effort, shaped by Singapore’s policymakers, to emphasise the distinctive identity of its ethnic Chinese community even as it rides on its shared cultural heritage to further ties with China.

For example, despite English being the medium of instruction in Singapore’s schools, it continues to have Special Assistance Plan (SAP) schools to ensure each cohort produces graduates with a deeper understanding of Chinese culture, and stronger language skills on par with the populations in mainland China, Taiwan and Hong Kong.

Even though the challenge of staking out an identity separate from China is one unique to Singapore, as it is the only city outside China with a Chinese-majority population, it is not something new.

Analysts, including Chong Ja Ian, a National University of Singapore professor who closely tracks Singapore-China ties, believe these concerns over how Beijing is seeking to establish markers of identity and affinity with the Chinese Singaporean population will only grow as more Chinese immigrants settle in the city state.

According to a United Nations study in 2015, about 18 per cent of Singapore’s foreign-born population of 2.54 million people were Chinese immigrants.

One example of a recent outreach by the mainland is the All-China Federation of Returned Overseas Chinese partnering with Singapore’s Jinshang Business Club in organising a virtual summer camp for Singaporeans aged between six and 18 starting this week, where they would learn more about China’s geography and history.

Dylan Loh, an assistant professor of public policy and global affairs at Nanyang Technological University, said Singapore’s push for a unique Chinese identity was thus in response to China’s “ability to mobilise its cultural heritage and overseas Chinese under the broad term of ‘Chinese identity’ to achieve certain foreign policy objectives.”

“There is growing recognition here and around the world … that China can use its influence, particularly through institutions [like] cultural centres and embassies and people overseas to great effect,” he said.

Loh said the exhibition articulating a “unique, discrete Chinese identity for Singapore” was aimed not only at domestic constituents, but also signalling to Beijing that China “cannot culturally claim” Singapore’s Chinese heritage.

“And that politically, Chinese Singaporeans are part of an autonomous, independent society and not of some imagined coherent, contiguous and uninterrupted overseas Chinese,” he added.

“Beijing is instead more concerned about how Singapore positions itself between China and the US,” he said, adding that the city state’s attitude towards the growing presence of Chinese power in Southeast Asia was more consequential.

Singapore leaders, including its Prime Minister Lee Hsien Loong, have repeatedly stressed that they would not take sides amid escalating tensions between the US and China, saying that the export-reliant country would not stand to gain either way.

But Lee, in his annual policy address last year, acknowledged that staying neutral had proven challenging.

Chong said the extent to which divorcing its ethnic Chinese population from the rest of the Chinese diaspora would affect Sino-Singapore ties would very much depend on how insistent the two countries were in seeking to define what it means to be ethnic Chinese.

“Ultimately for Singapore, this comes down to the degree to which Singapore – not just those who happen to be ethnically Chinese – and a sitting Singapore administration wish to see their relationship with China and where they think the limits ought to be, if any,” he added.

Singapore could develop a clearer sense of shared civic values that transcend partisan concerns, ethnicity, culture, and class, noting how diversity would only expand over time, he said.

“This is one way to reduce friction with China while emphasising Singapore’s distinctiveness,” he added.

Chong said the Chinese identity had historically been in flux and contested. For example, there were efforts to rethink what it meant to be Chinese in 1949 after the Chinese Communist Revolution, and also among Chinese intellectuals of the May Fourth Movement, he said.

“Singapore underscoring its own ethnic Chinese experience is part of the process of defining and redefining what it means to be ethnic Chinese,” said Chong.

“This is also part of state and nation building in Singapore and indeed postcolonial Southeast Asia, where states sought to consolidate the loyalties of their populations.”

Source: South China Morning Post – In Singapore, a search for a Chinese identity with a little less China

Don`t worry there is no significant man- made global warming. The global warming scare is not driven by science but driven by politics. Al Gore and the UN are dead wrong on climate fears. The IPCC process is a perversion of science.
View all posts by uwe.roland.gross »
« Beijing may target Apple, Boeing and other US tech giants in retaliation for Huawei ban
Coalition of 62 countries backs joint Australian, EU push for independent inquiry into coronavirus outbreak »

One thought on “In Singapore, a search for a Chinese identity with a little less China”