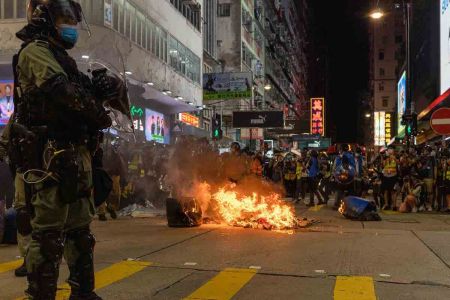 US Secretary of State Pompeo says new security law will be a ‘death knell’ for Hong Kong’s autonomy.”

“China warns UK of economic damage unless it backs down.”

“National security law for Hong Kong to boost ‘one country, two systems’ and ensure freedoms beyond 2047.”

What are business leaders to think as they wake up to such screaming and conflicting headlines each morning?  Will passage of the new security law mean the end for Hong Kong’s special status?

Or will the territory continue to serve as an entrepôt between China and the world? Why is Beijing passing this law now and what are the real risks of doing business in Hong Kong and China?

In search of answers, I’ll look at the motivation behind Chinese behavior, outline potential best, worst and most likely scenarios and make recommendations to assist businesses in navigating the ever-changing Chinese landscape.

At the end of May 2020, China’s National People’s Congress (NPC) approved a draft of a new national security law that aims to ban and punish sedition, secession, terrorism, foreign intervention and other activity posing dangers to national security in Hong Kong. The NPC is expected to draft a final version of the law and will enact it by including it in the Hong Kong Basic Law within the next few months.

By whom, and how, “endangering national security” will be interpreted is uncertain and worrying, but the interpretation undoubtedly will be 100% in line with Beijing’s interests. Any person or business supporting protests will be vulnerable to retribution.

The law also allows China’s security agencies, in particular the Ministry of State Security (akin to the FBI and CIA), to operate openly in the city.

Out of 180 U.S. companies in Hong Kong that responded to a recent American Chamber of Commerce survey, 54% were “very concerned” while 30% were “moderately concerned” about the overall threat to Hong Kong’s business environment as well as the law’s effects on free speech and other basic civil liberties.

Furthermore, 30% of those surveyed said that they were considering moving their operations

Some investment managers have even gone so far as to say that there will be no threat to Hong Kong’s role as Asia’s pre-eminent financial center.

While a minority of politicians in Hong Kong’s Legislative Council and high-profile figures such as the publisher of Apple Daily, Jimmy Lai, and Hong Kong’s “father of democracy,” Martin Lee, are vehemently opposed, the law is a fait accompli that businesses will have to deal with in a practical manner.

The raison d’etre of the Chinese Communist Party and Xi Jinping’s quest for China’s national rejuvenation is to repudiate China’s “Century of Humiliation” and for China to regain its rightful place in the world. If the mid-19thCentury Opium Wars were the nadir of Chinese History, then the 2008 Beijing Olympics signified China’s return to the world stage and its status as a nascent superpower.

The 2008 U.S. financial crisis gave a further boost to Chinese confidence that the system of “socialism with Chinese characteristics” was superior to the Western liberal order.

The current US administration’s “America First” unilateralist policy and its muddled response to the Covid-19 crisis were arguably factors in the timing of Beijing’s decision to approve the new law. Feeling that the tools at the disposal of the US to oppose this measure were limited, Beijing decided that it could handle the risk of sanctions or other potential repercussions.

Everything in China is inherently political, and economics will always take a back seat to politics. China values stability at the cost of freedom, and the new law is a pre-emptive strike against the return of protests halted due to the coronavirus.

The Hong Kong protests had been intensifying over the last year, with some bombings and arrests of people with weapons caches and bomb making material.  Xi Jinping was reportedly livid when protests interfered with the founding of the PRC’s 70th anniversary last October.

Beijing decided that enough is enough, and while there will be isolated protests in the short-term and beyond, China is confident that its law and order tactics will ensure the stability and prosperity of Hong Kong in the long run.

China’s proposed enactment of the new law is thus an extension of its Covid-19 strategy: namely, to isolate, trace and eliminate.  The new law allows China to isolate the protest element in the territory, use its impressive AI and social media monitoring prowess to trace those involved and eliminate the virus – or, in this case, the protests.

Beijing’s stance on any sort of dissent vis-à-vis the business community was exemplified by its October 2019 reaction to a tweet from the general manager of the Houston Rockets that almost derailed the NBA’s billion dollar China business.

All NBA activities in China were immediately frozen and commercial contracts were violated. While activity has resumed, Houston Rockets’ games are still banned, and the NBA has taken to self-censorship to appease those in Beijing.

There are numerous other examples of how Beijing forces businesses to self-censor, including the August 2019 resignation of the chairman of Cathay Pacific Airways, following the participation of some of its employees in anti-government protests; HSBC’s being forced to make a fealty oath to Beijing regarding the new security law; and Marriott Hotel’s firing of a US employee over a tweet supporting Tibet.

Self-censorship is a centuries-old survival mechanism for individuals and entities in China, and thus companies operating in China and Hong Kong will need to refine their policies governing employee behavior and social media communications to avoid upsetting the powers that be.

Now I will briefly sketch out what in my opinion are the best, worst and most likely scenarios as well as touch upon some attendant risks in Hong Kong.

My underlying assumption in both the best case and most likely scenario is that commercial law will not be much affected by the new security law, as Beijing recognizes that Hong Kong’s independent judiciary (in the commercial sector) and common law system is the basis for Hong Kong’s commercial success.

China’s view of the situation is simple; as long as you are not engaged in behavior that undermines the social order, you have nothing to worry about.  In this scenario, Chinese state activity will focus on rooting out the extreme protesters, and life will go on as usual.

Normal Hong Kong citizens will be muzzled, the rule of law will continue, and Hong Kong will remain as an entrepôt for China and the world.  A June 8  article in the South China Morning Post summarizes Beijing’s view of the situation.

Even in the best case, however, we will see an erosion of Hong Kong’s standing as an international financial center and a movement of the corporate financial, legal and accounting infrastructure to Shanghai. This has been happening ever since the 1997 handover, and the passing of the new law will accelerate this trend.

Worst cases scenarios are a function of the dark side of one’s imagination. Fortunately, the apocalyptic worst case scenario in Hong Kong’s case is not very likely.

In that worst case, continued large scale anti-government protests would lead Beijing to dispatch the People’s Liberation Army to quell the protesters, resulting in bloodshed and leaving a population seething with resentment for years to come. Multinationals would flee the city, and Hong Kong would become just another Chinese city.

A more predictable bad case scenario would be an escalating, tit-for-tat sanctions and public relations struggle between China and the US, with Washington cutting Chinese banks off from the US dollar clearing system.

In such a scenario, Chinese banks would no longer be able to conduct US dollar transactions, effectively destroying Hong Kong’s role as an international financial center.

This would set off a destructive response cycle, with China potentially cutting off supply chains for US companies such as Apple as well as ceasing to purchase US agricultural and other goods.

China would also make life difficult for American citizens by potentially suspending visa-on-arrival privileges now accorded to US citizens and stopping the renewal of visas of the 85,000 US citizens residing in Hong Kong, effectively banishing them from the city.

US citizens in business disputes could also face detainment. That’s the fate suffered by two prominent Canadians – Michael Spavor and Michael Kovrig – in response to Canada’s detention of Huawei CFO Meng Wanzhou. (The risk to individuals will only increase if she is extradited to the US.)

Internet services might be severely limited, and Hong Kong could suffer a brain drain as the educated and moneyed elites headed for the exits.

The US will most likely take away Hong Kong’s special trading status and apply export sanctions on certain technologies, but these are more symbolic than substantive measures.

There will be increased emigration from Hong Kong, but most elites already secured their foreign passport in 1997.

While the foreign staffs of international law and accounting firms will decrease, their actual business operations will continue.

The US will also probably invoke the Global Magnitsky Act, sanctioning Chinese officials involved in overseeing Hong Kong and freezing their assets. Sanctions and counter-sanctions could easily escalate out of control, to no one’s benefit.

While it is hard for businesses to plan for geopolitical upheavals, businesses do need to ensure they have contingency and business continuity plans in place to deal with the rapidly changing environment and likely scenarios described above. Key steps to consider include:

The Chinese saying “shā yī jǐng bǎi” (杀一儆百) means “to kill one to warn one hundred.” China has a traditional fear of millennial movements; the mid-19th Century Taiping Rebellion was started by one man who thought that he was the younger brother of Jesus, resulting in the deaths of tens of millions of people.

The CCP believes a spark can ignite a whole movement (as they have seen in the reaction to George Floyd’s murder in the US), and will do all it can to remain in power, enforcing social stability at any cost.

The Hong Kong protests of the last few years were an affront to the party’s way of thinking, and it chose now as the time to approve the new security law to stop what has been a major embarrassment on its doorstep.

The return of Hong Kong to Chinese control was inevitable, and the passage of the new security law will change the balance of the “one country, two systems” dynamic that has governed Hong Kong since the 1997 handover.

China, despite oft-times hostile rhetoric, is actually a very practical actor, and will allow business in Hong Kong to continue as usual as long as enterprises toe the party line.

The situation will remain volatile, however, for the foreseeable future, and businesses should pay careful attention to developments and enact prudent countermeasures now while also preparing for future contingencies.

Howard Snyder is currently project manager for Asia for TorchStone Global, a boutique US security firm. He has lived in Asia for over 30 years and speaks fluent Chinese and Japanese.

Don`t worry there is no significant man- made global warming. The global warming scare is not driven by science but driven by politics. Al Gore and the UN are dead wrong on climate fears. The IPCC process is a perversion of science.
View all posts by uwe.roland.gross »
« Two-husband strategy may be a remedy for China’s one-child policy, Shanghai professor says
China’s military has not reached superpower status just yet »

One thought on “Understanding and navigating Hong Kong’s security law”