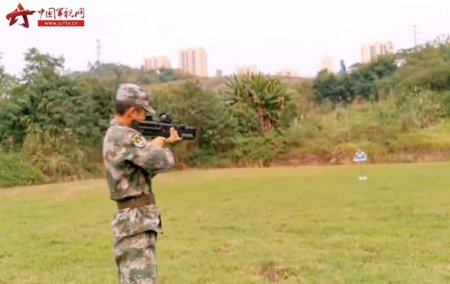 According to Liu Xuanzun on Global Times, the Chinese People’s Liberation Army (PLA) has miniaturized an electromagnetic railgun and developed pistol- and rifle-sized synchronous induction coilgun prototypes. These weapons’ technical capabilities were recently revealed to the general public for the first time in a demonstration session.

The coilguns are essentially miniaturized, portable electromagnetic railguns so they can be used by single foot soldiers, the report said. To deal with complicated battlefield situations, they can also be mounted on small land robots and conduct armed reconnaissance missions.

According to the performance demonstration video, the coilguns use bullets stored in reloadable magazines just like a conventional gun, and they also handle like one. The coilguns can easily penetrate multiple wood plates and thin steel plates at a relatively close distance. Unlike a conventional firearm that uses the ignition of gunpowder to push a bullet slug out of a gun barrel at high velocity, a coilgun or railgun uses electromagnetic force to accelerate a projectile as it travels along the gun barrel before leaving it at an even higher velocity, military observers said.

Judging from the video, the coilguns have shown a high penetration capability and did not make much sound, making them good choices for special operations like behind-enemy-line infiltration missions, a military expert who asked not to be identified told the Global Times on Sunday, June 28.

It is obvious that these weapons are still in the prototype stage, as their range and impact are not optimum, very likely due to the guns’ limited battery or capacitor capacity to store and release energy, the expert said. But once this technical problem is solved, the coilguns will become much more powerful and could replace the firearms of today.

China is also developing full-sized electromagnetic railguns, as one prototype has been spotted out in the open installed on a tank landing ship, reportedly for testing. The railgun is expected to become the PLA Navy’s choice for its main warship guns in the future, said military experts, who named variants for the Type 055 destroyer as potential platforms.

Author of the book "Tiananmen's Tremendous Achievements" about how with the help of Tiananmen Protests, talented scholars with moral integrity seized power in the Party and state and brought prosperity to China. The second edition of the book will be published within a few days to mark the 25th anniversary of Tiananmen Protests All the parts in the first edition remain in the second edition with a few changes due to information available later and better understanding. There are also some changes for improvements of style. The new parts are Chapters 12-19 on events in China after the first edition was published: The fierce power struggle for succession between reformists and conservatives; Xi Jinping winning all elders’ support during his mysterious disappearance for 2 weeks in early September, 2012; and Xi Jinping Cyclone. Chan Kai Yee's new book: SPACE ERA STRATEGY: The Way China Beats The US An eye-opening book that tells the truth how the US is losing to China. The US is losing as it adopts the outdated strategy of Air-Sea Battle while China adopts the space era strategy to pursue integrated space and air capabilities: It is losing due to its diplomacy that has given rise to Russian-Chinese alliance. US outdated strategy has enabled China to catch up and surpass the US in key weapons: Hypersonic weapons (HGV) that Pentagon regards as the weapon that will dominate the world in the future. Aerospaceplane in China’s development of space-air bomber that can engage enemy anywhere in the world within an hour and destroy an entire aircraft carrier battle group within minutes. Anti-satellite (ASAT) weapons, anti-ASAT weapons, stealth aircrafts, drones, AEW&C, etc. The book gives detailed descriptions of China’s weapon development based on information mainly from Chinese sources that the author monitors closely. U.S. Must Not Be Beaten by China! China is not a democracy. Its political system cannot prevent the emergence of a despotic leader or stop such a leader when he begins to bring disasters to people. A few decades ago, Mao Zedong, the worst tyrant in world history did emerge and bring disasters to Chinese people. He wanted to fight a nuclear war to replace capitalism with communism but could not bring nuclear holocaust to world people as China was too weak and poor at that time. If a despot like Mao Zedong emerges when China has surpassed the US in military strength, world people will suffer the misery experienced by Chinese people in Mao era. China surpassing the US in GDP is not something to worry about as China has the heavy burden to satisfy its huge population, but China surpassing the US in military strength will be world people’s greatest concern if China remains an autocracy. US people are of much better quality than Chinese people. What they lack is a wise leader to adopt the correct strategy and diplomacy and the creative ways to use its resources in developing its military capabilities. I hope that with the emergence of a great leader, the US can put an end to its decline and remain number one in the world. China, US, space era strategy, air-sea battle, space-air bomber, arms race, weapon development, chan kai yee
View all posts by chankaiyee2 »
« Cadence Column: Asia, June 29, 2020
President Trump has tools to pressure China. Will he use them? »