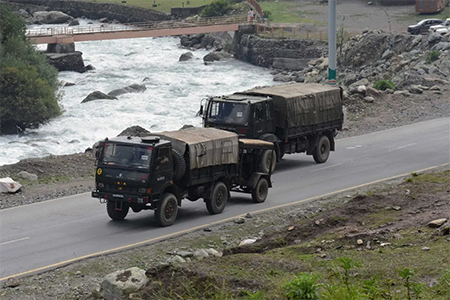 India and China traded blame for rising tensions over their disputed Himalayan border on Saturday following their highest level meeting since a deadly clash in June.

India’s Defence Minister Rajnath Singh and his Chinese counterpart General Wei Fenghe released rival statements accusing each other of inflaming the showdown after talks late Friday on the sidelines of an international meeting in Moscow.

Singh said they had “frank” discussions on the dispute and the strained relations between the world’s two most populous countries.

Their troops have had a number of showdowns since a clash in the Ladakh region on June 15 in which 20 Indian troops died. China has also acknowledged suffering casualties but not given figures.

Both sides have since sent tens of thousands of troops to the remote, inhospitable region which sits at an altitude of more than 4,000 meters (13,500 feet).

Singh “emphasised that the actions of the Chinese troops, including amassing of large number of troops, their aggressive behaviour and attempts to unilaterally alter the status quo were in violation” of agreements between the neighbors, said an Indian statement.

India wanted to settle the dispute through talks “but at the same time there should also be no doubt about our determination to protect India’s sovereignty and territorial integrity.”

“The cause and truth of the current tension on the border between China and India are very clear, and the responsibility lies entirely with India,” said General Wei.

“China’s territory cannot be lost,” he added, calling on India to “strengthen control of frontline forces” and “refrain from any actions that may cause the situation to heat up”.

Both ministers were at a meeting of the eight nation Shanghai Cooperation Council.

India has withdrawn from military manoeuvres organised by the group where its troops would have been alongside Chinese forces.

It has also stepped up economic pressure by banning Chinese apps and blocking Chinese products at ports and stopping its companies from bidding for contracts.